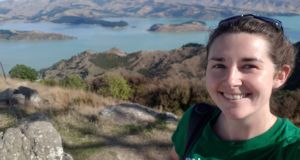 Molly Davies lived and worked on a boat in remote New Zealand.

I left my home in Co Kerry and moved to New Zealand last October. If you’d asked me then what I was most worried about, I can assure you a global pandemic was certainly not on my list.

My awareness of Covid-19 began with a routine email from my dad, back in early March. All of our communications are through email as he has never owned a mobile phone – a choice I greatly admire. His update described life as usual, with a side order of coronavirus-related anxiety. Most importantly the news was the Six Nations rugby matches were cancelled.

Before this, I ’d heard relatively little about the coronavirus. I worked and lived on a boat in a very remote part of New Zealand for a week at a time with limited connection to the outside world. Little pieces of news about the virus would filter in through the daily local newspaper or through comments from international guests on board. I remember being asked for hand sanitiser at an alarming rate during what would become my last working shift on the boat, but nothing else stood out. At the time I learned more about what was to come through communications with family and friends at home in Ireland.

The first case of coronavirus in New Zealand was reported on February 28th, but it wasn’t until St Patrick’s Day that I began to sense some unease. I spent the last week of pre-lockdown life in Northland, far from my usual base. It felt like a surreal holiday tinged with existential dread. Little oddities ensured I couldn’t forget about the pandemic. Checking in at the hostel, I had to hand over my passport with proof of arrival date because those who came to New Zealand after March 14th were required to self-isolate or face deportation. When I went out for a drink, the bartender, with an apologetic look on his face, handed me a clipboard with my pint, which asked for my details. I woke up the next morning to find my roommate in floods of tears, because her flight back to Germany the following day had been cancelled. A high number of domestic flights were also grounded, and when I tried to rebook my flight back to Queenstown for an earlier date, nothing was available. It became a stressful waiting game wondering if I would be stranded but thankfully in the end my flight went ahead. A full lockdown was announced while I was in the air. This meant the country’s borders would close and a state of national emergency was announced. It was to begin in 48 hours and would last for four weeks.

“We must fight by going hard and going early,” New Zealand’s prime minister Jacinda Ardern said in a statement to the nation on in March. The decision to go into full lockdown before even a single coronavirus death was confirmed appeared to be excessive at the time, but the statistics suggest that this approach is working. New Zealand has a similar population to Ireland, but has fewer than a tenth of the number of cases. There have been 19 Covid-19 deaths here and Ireland more than 1,000.

New Zealand’s remote location and bigger land mass has certainly been an advantage. The country has been able to watch the virus spread like a hawk, crafting a master plan from afar. Its four-stage framework for tackling Covid-19 was announced to the country in a clear and thorough manner, laying out what could be expected at each alert level. At present, we are at alert level three and hoping to move down to level two in the next few weeks.

The country’s response is as strong as its leadership. I, like many others, admire the prime minister’s decisiveness, wit and compassion; chastising the people who put others in danger while reassuring children that the Easter bunny and tooth fairy are essential workers. I find Ms Ardern grounded and competent – she is the prime minister who jumped on Facebook live in her loungewear for late-night Q&A after putting her toddler to bed.

I’m equally impressed by the director general of health, Dr Ashley Bloomfield. Calm and collected, his contribution to the daily 1pm press conference is like listening a (rather morbid) bedtime story.

Overall, people are compliant with the rules and understanding of the situation. New Zealand is one of the most beautiful places in the world, and in the leafy Christchurch suburb where I am staying with friends, there are always people out walking a safe distance apart. From what I observe. the country is blossoming with kindness. People still smile and say hello. Most houses in the neighbourhood have teddy bears in their windows for children to spot, giving parents a needed break from entertaining. The dogs have never looked happier. New Zealand is getting through this pandemic in the most Kiwi way; with kindness, calmness, and a whole lot of exercise. I am happy to jump on that bandwagon.