Coronavirus: Drastic new powers will allow authorities to lock down regions and keep people at home 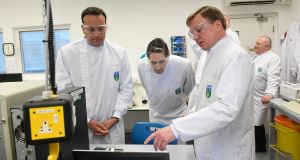 The Dáil reconvenes today to rush through emergency legislation with drastic powers to fight the coronavirus crisis, as new figures show the disease has struck almost nationwide.

A further 74 cases of the virus, also known as Covid-19, were reported last night, a record number for the fifth consecutive day. The new cases involve 29 women and 45 men. There are now 366 confirmed cases in the Republic.

Two deaths have been officially confirmed so far. Asked about reports online of a third death from the disease on Wednesday, chief medical officer Dr Tony Holohan said he did not have any notification of this but it can take time for cases to “come through” in processing.

Of the first 271 cases, some 40 per cent involved men and 59 per cent are female, with 23 clusters. Just six patients have required treatment in intensive care; this is 2 per cent of the overall number.

There have been two confirmed deaths, giving a case fatality rate of 0.7 per cent. While far lower than the percentages recorded in Italy, these figures are likely to grow as the health service comes under pressure from the expected surge in cases over the coming fortnight.

One-third of cases resulted in patients being hospitalised; this figure is artificially high because at the start of the outbreak all patients were sent to hospital, even if their symptoms were mild.

Two-thirds of cases were among people aged under 55 years; one baby contracted the virus, but there were no cases among children aged one to four years.

One case in five involved a healthcare worker, and one-third of these cases were associated with travel. Dublin has the highest number of cases, with 129 cases, followed by Cork (48) and Limerick (14).

The Cabinet meets today to hear updates on the deepening crisis, which has closed schools and pubs, forced business to shut and put tens of thousands of people out of work.

The Bill coming before the Dáil gives the Minister for Health extensive powers to lock-down regions and restrict travel, and to order people to remain in their homes. It also provides for the detention or isolation of people if this is necessary to stop the spread of Covid-19.

The Emergency Measures in the Public Interest Bill 2020 may be law by the weekend.

Northern Ireland, which yesterday reported six new cases, is to shut all schools from Monday, First Minister Arlene Foster and Deputy First Minister Michelle O’Neill announced. Schools are also to close in the rest of the UK, where the death toll yesterday reached 104.

Meanwhile the Health Service Executive said almost 25,000 people have responded to its callout for staff to return from retirement, from work in other areas, or from overseas to work in the health service during the coming weeks. The number includes almost 1,000 nurses.

Civil servants, particularly in the departments of defence and agriculture, are to be redeployed for an initial three-month period to help with the response to the outbreak.

The HSE signed a €31 million contract for the supply of personal protective equipment for staff working on the frontline. Separately, a consignment of 30,000 swabbing kits were delivered to Ireland on Wednesday, thus ensuring an adequate supply of equipment for a significant ramping up of testing.

Meanwhile, Italy, the European country hardest hit by the virus, recorded 475 deaths, bringing its total to 2,978. Globally, the number of coronavirus cases passed 200,000, with 8,006 deaths.