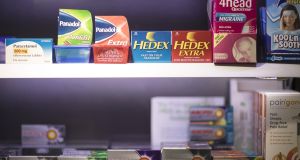 A dramatic increase in sales of over-the-counter medications such as paracetamol and ibrupofen as people became spooked by the coronavirus outbreak has eased and supplies remain solid, pharmacists and producers have said. File photograph: Simon Dawson/Bloomberg.

A dramatic increase in sales of over the counter medications such as paracetamol and ibrupofen as people became “spooked” by the coronavirus outbreak has eased and supplies remain solid, pharmacists and producers have said.

“We saw a big spike in sales of over the counter medication in the 10 days up until last Monday,” said Tony McEntee, managing director of the McCauley pharmacy chain which has 35 branches around the State.

“There was a bit of panic buying...People were definitely spooked a bit and every time there was a bit of bad news we saw a spike but that demand has been sated and we are back to normal,” he said.

“Our level of over the countrer medications in stock yesterday was no different to the same day last year. And I am not aware of any shortages coming down the line.”

Pharmacist Dave McFadden, who owns a shop on Prussia Street in Dublin 7, said “things are holding up fine” and “it is just a matter of people not panicking”.

“Wholesalers are keeping the flow going and we are getting our normal two deliveries a day,” he said.

Shane O’Sullivan, managing director of online pharmacy Healthwave, said his company had seen a “massive increase” in demand for its delivery service and had employed drivers.

“We have managed out supplies well and while there were a huge amount of queries about hand sanatiser and face masks, things have settled down a bit.”

He said there had been an surge in the sale of over the counter medications but it was being managed and he said the firm had stopped filling six-month prescriptions in a single order to ensure there were enough supplies for all.

“It is challenging but we are doing everything we can and customers have been very understanding,” Mr O’Sullivan said.

A spokewoman for GlaxoSmithKline, which makes Panadol, said the company had “experienced an increase in demand for some of our products”.

However, she said the company had plans in place “which includes measures to help secure reliable supply, such as holding strategic stock and dual sourcing”.

She said GSK took “the resilience and continuity of our supply chains very seriously, and we draw on our extensive experience to try and mitigate issues affecting supply.”

David Delaney of Medicines for Ireland, the representative body for the Irish pharmaceutical trade sector, said the country was well stocked and there was no need for people to stockpile or overpurchase.

He said planning for Brexit in recent times meant the sector was well placed to cope with the pandemic.

He said it was business as usual for the sector and there was no evidence to suggest that Ireland would face any general medicine supply issues.