Coronavirus: No further deaths and 42 new cases reported in State 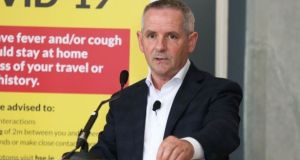 HSE chief executive Paul Reid said it has been a ‘a long six months’ since the first Covid-19 case confirmed in the State. File photograph: Leon Farrell/Photocall Ireland/PA

A further 42 cases of coronavirus were reported in the State on Sunday.

The National Public Health Emergency Team (NPHET) confirmed no further deaths from Covid-19 for the eighth consecutive day, leaving the death toll at 1,777. It confirmed an additional 42 cases, putting the total since the pandemic started at 28,760. This is the lowest number of daily cases confirmed since August 12th.

There were 142 new cases and no further deaths reported on Saturday.

Of the cases notified on Sunday, NPHET said 20 were men, 22 were women and 71 per cent were under 45 years of age.

Fifteen were confirmed to be associated with outbreaks or close contacts of a confirmed case while six cases were due to community transmission.

More than half the cases were in Dublin (24), with six in Limerick, and the remaining 12 in counties Carlow, Clare, Galway, Kildare, Longford, Offaly, and Sligo.

HSE chief executive Paul Reid said on Saturday it had been “a long six months” since the first Covid-19 case was confirmed in the State.

“But there’s also been inspirational responses from the public and healthcare workers,” he tweeted.

“A more difficult phase now but the same virus.”

In a statement, acting chief medical officer Dr Ronan Glynn said Saturday “marks six months since our first case of Covid-19. It has been a very difficult time for many and few have been left untouched in some way by the negative effects of this pandemic”.

Dr Glynn said during that time “our frontline workers have stepped up again and again. But underpinning it all has been each person playing their part by making the right choices, many times, each day. Together, we have broken the chains of transmission and flattened the curve,” he said.

“As cases rise again, it is these same behaviours that will once again make the difference, protecting ourselves, our families and our communities,” he said.

The latest case numbers were announced after one of the country’s leading public health experts warned a second national lockdown could not be ruled out if there was a surge in Covid-19.

Dr Cillian de Gascun, the chairman of the NPHET advisory group said the reintroduction of stay-at-home restrictions would be avoided “if at all possible” but they had been shown to work in suppressing the spread of the virus.

It followed a warning by the Minister for Health Stephen Donnelly on Wednesday that the country was close to a second national lockdown because the State was at “a tipping point”.

As society eased out of lockdown restrictions, cases have been steadily rising since mid-July prompting acting Dr Glynn to issue warnings about the spike, particularly among young people.

While alarm bells were sounded over the jump in cases, there has been a fall-off in the number of people admitted to hospital and the number of deaths.

There are currently five people in Intensive Care Units and 30 people in hospital with the disease.

Fines of up to €2,500 or a maximum of six months in prison will be the sanction if bars infringing social distancing regulations refuse to close for a day.

Closure orders could be issued by a district court resulting in a pub being shut for up to 30 days.

Plan to reopen drink-only hostelries have been put on hold again as the government attempts to contain the cases.

Tánaiste Leo Varadkar announced a €16 million support package for pubs, bars and nightclubs which are enduring a prolonged wait to raise shutters.

The new initiatives included waiving court fees and associated excise and stamp duties relating to the renewal of pub and other liquor licences and waiver of excise duty on on-trade liquor licences on renewal this year. – Additional reporting: PA