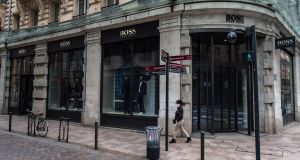 German fashion house Hugo Boss expects the impact of the coronavirus pandemic to get worse before it gets better after reporting a 17 per cent fall in first-quarter sales, but added that it was seeing signs of a rebound in China and online.

The company reported first-quarter sales of €555 million, ahead of average analyst forecasts for €548 million, while its loss before interest and taxation came in at €14 million, worse than average forecasts for €6 million.

It expects second-quarter sales to fall by at least 50 per cent but said it is confident the retail environment will gradually improve from the third quarter, positively impacting sales and earnings in second half of year.

Hugo Boss, known for its smart men’s suits, said all of its own retail stores and concessions have reopened in China since the end of March and sales in April were only around 15-20 per cent below the previous year.

Luxury player Hermes has also said that business was picking up strongly in China after shops reopened.

Hugo Boss said online sales jumped 39 per cent in the first quarter and accelerated again strongly in April, with sales more than doubling on its own site and via partner websites.

The company, which already announced moves to protect its cash balance such as suspending store renovations and new openings and limiting the inflow of stock, said it is targeting extra cost savings of at least €150 million this year.

It is aiming to cut the inflow of inventory by at least €200 million compared to its original plan, including cutting its own production.

Hugo Boss announced in March that chief executive Mark Langer would leave on September 30th, but stay on until the end of the year as a consultant due to the coronavirus crisis while the company looks for a successor. – Reuters