Coronavirus: Government to ramp up support for laid-off workers

The Department of Social Protection is struggling to maintain social distancing with the surge in emergency unemployment claims from people signing on due to the coronavirus outbreak. Video: Enda O'Dowd 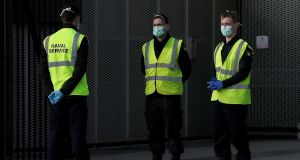 Members of the naval service outside the 3Arena in Dublin on Friday. Photograph: Brian Lawless/PA Wire

The Government is considering a proposal under which it could pay up to three-quarters of the wages of thousands of staff who have been laid off as a result of the coronavirus pandemic.

In the interim, the Government on Friday night announced changes to its existing financial support arrangements, which would allow employers to top up the Covid-19 unemployment payment of €203 per week offered by the State to the 140,000 people who have lost their jobs in the past week.

Sources said Ministers were now looking at a broader scheme similar to measures being introduced elsewhere in Europe and the UK, where the government has committed to pay 80 per cent of wages, up to £2,500 per month, for people out of work as a result of the pandemic.

It is expected the details of such a scheme will be announced in the next week, with work ongoing at Government level on how it would apply in Ireland.

Trade unions submitted proposals to Government on Friday for a €1.75 billion scheme which would pay workers up to a cap equivalent of €40,000 per year. It would see the Government pay 75 per cent of the wages for up to three months, with employers covering the remainder.

Unions and business lobby groups had strongly criticised the Government over the rules governing its existing employer refund scheme, which they maintained would penalise employers who gave workers additional money.

Minister for Employment Affairs and Social Protection Regina Doherty said last night the Government had agreed that employers who engaged with the scheme “should be allowed to top up the payment by the State”.

Meanwhile, President Michael D Higgins last night signed the Health (Preservation and Protection and other Emergency Measures in the Public Interest) Bill 2020, which was passed in the Seanad and gives the Government emergency powers to deal with the pandemic.

“As President, I am urging all citizens, given the emergency of our situation in relation to the grave challenge to our public health, to respond in a generous way to the Health Service Executive’s advice on measures to alleviate the spread of Covid19,” Mr Higgins said.

“These new health and social measures may be difficult for many, but they affect us all and we are at a point now when a person’s actions have consequences not only for themselves but for all in society. Irresponsible individual action puts all at risk. We must draw on our strengths now.”

Speaking in Templemore, Co Tipperary, Taoiseach Leo Varadkar said he was hopeful the new powers would not have to be used. Ireland had a history of policing “by consent, never by coercion”, he said. “And I hope that is never going to change as a consequence of this crisis.”

Public health officials say they have no current plans for further social restrictions or the closure of borders to counter the spread of coronavirus.

Ireland can “get a long way down the road” in fighting the virus through compliance by people with the measures already introduced, according to chief medical officer Dr Tony Holohan.

Another 126 new cases of the disease were reported by the National Public Health Emergency Team on Friday evening, with cases involving community transmission surpassing the number of travel-related cases for the first time.

There are now a total of 683 confirmed cases in the Republic, and three deaths.

With doctors at the frontline of the health services growing increasingly concerned about the system’s ability to respond to the massive surge of cases expected over the coming weeks, some have suggested a “lockdown” of non-essential services would help buy time by reducing the spread of infection. Oncologist and former senator Prof John Crown said on Friday night all non-essential workplaces should be closed, though people could continue to work from home.

Asked about such calls, Dr Holohan described proposals to stop people leaving their homes as “very severe” and “draconian”.

“I don’t think at this moment in time, based on the measures in place and the high compliance, we have justification for stepping up to something like that,” he told a briefing in the Department of Health.

“I don’t anticipate us recommending the closure of borders,” he added, pointing out that incoming travellers were required to self-quarantine for 14 days.

Redesigning part of the Cork flood defences may cause five year delay – council 10:16
Covid-19: Public advised to stop using all Virapro sanitary products 09:05
Putting the clocks back: Sleep experts question benefits of not changing time 07:24
New Science on Screen Film Festival to have ‘join the conversation’ theme 06:00
‘Propensity for violence’ evident in extremist protests on streets 01:00