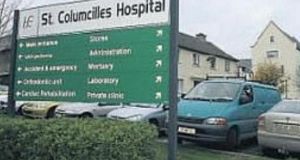 A south Dublin hospital has cancelled outpatient appointments as it tackles a Covid-19 outbreak after 22 patients tested positive for the illness.

A number of staff working at St Columcille’s Hospital, Loughlinstown, who were deemed close contacts of confirmed cases are also self-isolating.

On Friday the hospital moved to cancel outpatient appointments as a result of the outbreak and notified affected patients.

A spokeswoman said some virtual appointments would continue, and where consultants were concerned about patients “the hospital will make every effort to safely accommodate them during this time”.

St Columcille’s is an acute hospital with more than 100 beds serving southeast Dublin and east Wicklow. The facility had not reported a Covid-19 case for several months before the current outbreak.

Initially, a spokeswoman for the hospital said the outbreak had arisen after “a patient who was asymptomatic on a ward in the hospital developed symptoms and was subsequently tested for Covid-19”.

The first case was identified when the patient was tested prior to a pending transfer to another acute hospital in late October. They had been in St Columcille’s for several weeks beforehand.

“I can confirm that an asymptomatic patient was scheduled to be transferred to St Vincent’s University Hospital, and as part standard protocols the patient was tested for Covid-19 and subsequently found to be positive,” said the hospital spokeswoman.

On foot of the first positive case, the hospital implemented a “surveillance process” to test all patients and staff deemed close contacts, the spokeswoman added.

It is understood there were some concerns internally that the number of staff who were deemed to be close contacts of the initial case had been too limited.

In response, the hospital said it had followed Health Service Executive and Health Protection Surveillance Centre guidelines “that asymptomatic patients are contact traced for 24 hours”.

If staff had been wearing face masks and following precautions when interacting with patients who later tested positive, “they are considered casual contacts and no testing is advised,” the spokeswoman said.

“All staff who were close contacts of the patients have been tested and are currently self-isolating for the required 14 days,” she said.

The hospital did not respond to a query asking how many staff were self-isolating as a result of the outbreak. The hospital’s injury unit and medical assessment unit remain open.

“The Hospital Covid Outbreak Committee, which is led and informed by our consultant microbiologist, the hospitals infection prevention and control team, hospital consultants, HSE occupational health and HSE public health department have met on a daily basis since the outbreak and progress has been made to stabilise the situation,” said the spokeswoman.