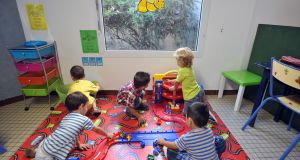 Creche owners will be able to access a third of their programme support payment by April 17th to assist with cash-flow issues. Photograph: Frank Perry/AFP/Getty

Payments to creches under the Government’s enhanced Covid-19 support scheme have been delayed, and will not be made before April 24th.

In a communication to creche providers on Friday evening, the Department of Children and Youth Affairs confirmed that a funding agreement – effectively a contract – would issue to childcare providers “early next week”.

The department also said that when signed agreements had been returned to it, the payments would be backdated to April 6th. The department is also allowing childcare providers early access to a cash pile that was not due for distribution until June.

Creche owners will be able to access a third of their programme support payment by April 17th to assist with cash-flow issues, the department has told them in an email. This is the same funding stream used to provide money for the sector when it faced an insurance crisis before Christmas.

The delays in the final roll-out of the scheme have been caused by logistical issues associated with how the scheme works in tandem with the general Government wage support scheme, which pays up to 70 per cent of wages up to a level equivalent to a salary of €38,000 a year.

In March the department announced it would top up the remaining 30 per cent of a wage in exchange for creche fees being waived for parents for three months and children being guaranteed their place at the end of the Covid-19 crisis.

Although the scheme was welcomed by some childcare representative associations and parents, it was criticised by some creche owners and representative groups who claimed it was causing cash-flow issues. They said this was because, although it took the wage bill of the sector on to the State’s balance sheet, many operators were left with overheads that would not be covered.

The fine details of the creche subsidy scheme were the subject of a meeting between Minister for Children Katherine Zappone, Taoiseach Leo Varadkar and Minister for Finance Paschal Donohoe on Friday. The scheme is thought to have rankled with some in Government when it was announced, and one senior Government source described it as a “solo run”.

In a statement on Friday evening, however, Mr Donohoe said he “support(ed) the necessity to ensure that parents can return to work and training as seamlessly as possible, including with childcare support”.

He said childcare services were “an extension of our education system. I am pleased that we are finalising measures to effect the supports needed to ensure that our entire economy is ready to return to work in the best possible shape in the period ahead.”