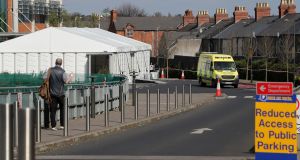 A temporary marquee structure erected on the grounds of the Mater hospital in Dublin. Photograph: Brian Lawless/PA Wire

Private hospitals have sought clarification from the HSE on whether consultants in public facilities can continue to treat patients privately during the coronavirus crisis.

It is understood that some private hospitals would be concerned if they could no longer provide care to private patients under the terms of a deal reached with the Government earlier this week while public hospitals could continue to do so.

Under the heads of an agreement announced on Monday, the State will effectively take over the facilities in 19 private hospitals for a three-month period. As part of this deal, beds and other facilities will be for public use only.

However, the Department of Health said at three separate briefings with medical organisations and health insurers on Wednesday that private patients would still be accommodated in public hospitals for treatment for non-Covid-19 illnesses.

It is understood that after details of the continuation of private practice in public hospitals were reported in The Irish Times on Thursday, the association representing private hospitals wrote to the HSE seeking clarification on the issue.

It is understood that some private hospitals would be unhappy at public hospitals being allowed to continue private practice in such circumstances.

Some are understood to believe that such a development could undermine the good faith that has underpinned the process between the Government and the private sector to date on dealing with the coronavirus crisis.

Under the agreement reached on Monday, consultants working full time in public hospitals will be offered three-month contracts to treat only public patients on a salary ranging from just over €141,000 to €195,000 per year.

However, many existing public hospital consultants have contracts (known as categories B and C) that allow them to treat private patients in public hospitals, and these arrangements are expected to continue.

In an internal circular to its members, the Irish Hospital Consultants Association said the Department of Health had confirmed it was not envisaged that the existing contracts of those working in the public system would be “unilaterally amended by the employer”.

However, the association told members that “clearly flexibility is required in the current circumstances in relation to work location and the nature of work to be undertaken”.

The Irish Medical Organisation told its members there would be no change to the current contractual arrangements for type B and type C consultants working in the public hospital system.

The Department of Health has not published the full heads of agreement reached with public hospitals nor has it yet answered questions on its operation.