Cork to be ‘fastest growing region’ for next 20 years 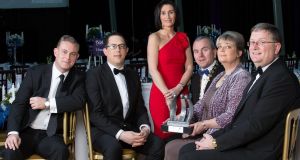 Affordable apartments to rent together with investment in public transport are essential if Cork is to become a thriving regional centre to counter act the development of Dublin, business leaders in city heard on Friday.

Cork Chamber president Bill O’Connell told the chamber’s annual dinner that Cork offered a unique location for business but it was critical that the Government supported the city and metropolitan area is its forthcoming capital investment programme.

“Cork will be the fastest growing region in the country for the next two decades. We are ready for this challenge but Government must be ready to allocate investment accordingly and acknowledge the potential of Ireland’s second city to substantially strengthen Ireland’s metropolitan profile.”

“Cork Chamber calls for commitment by Government to invest in Cork’s public transport needs in particular a rapid transit system to enable our city region to grow and a high-speed rail connecting Cork and Dublin.

“We are also calling for recognition of Cork’s docklands as a national strategic asset, a space where people will enact Government’s vision of living and working in a vibrant high-density city,” Mr O’Connell told more than 1,000 guests at Cork City Hall.

Mr O’Connell also highlighted the need for the State to become better at forward planning and he identified the long-term delivery of affordable rental accommodation as critical to ensuring Cork continues to attract industry.

“Affordable apartments are essential to economic growth. Their delivery is critical if we are to have a housing stock that meets the needs of an increasingly mobile and dynamic workforce. We have a vision for Cork to be a smart, sustainable and high-density city. Cork should grow up and not out.”

Meanwhile, Cork Chamber also announced its Company of the Year Awards with the overall award going to US multinational, Boston Scientific Cork which next month celebrates 21 years in the city.

Boston Scientific vice-president operations Seán Gayer said: “This is a fantastic recognition for the entire Boston Scientific team at Model Farm Road. It is an honour to be considered in the same light as previous finalists, who have inspired business excellence in our community.”

Mr Gayer said the Cork company has an annual output of 6 million units per year and supports a workforce of 890 employees.

Large company of the year was won by Teamwork. com.

Mr O’Connell noted the remarkably high standard of entrants in the competition, which is run in association with Vodafone Ireland, and how becoming a finalist in these awards is an achievement in itself.

“The legacy, longevity and prestige of these awards are renowned and coveted within the business community. It has been a fantastic journey for all of us on the judging panel over the last few months, getting to meet diverse businesses who are doing great things in Cork.”