Raise the Roof march is told there should be increased funding for public housing, an end to evictions and a cap on rents 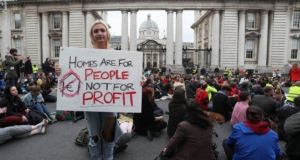 A file photograph of participants at a previous Raise the Roof protest in Dublin. Photograph: Brian Lawless/PA Wire

The Government should increase capital funding for public housing, end evictions and cap rents to tackle the housing and homelessness crisis, a Cork rally was told.

On Monday evening, some 500 people attended the Raise the Roof march from Cork City Hall to Lapp’s Quay where Barry Murphy, president of the Cork Council of Trade Unions, called on the Government to make resolving the housing and homeless crisis an immediate priority.

“Tonight, almost 4,000 children have nowhere to call home, and well over 10,000 of our fellow citizens are homeless – we demand action from this Government to build public housing on public lands, stop evictions and make having a home a right and not a privilege,” he declare to loud applause.

Mr Murphy called on members of Cork City Council to follow the example of Opposition politicians in the Dáil last October when they voted for several proposals, including adopting more aggressive measures to bring empty properties and unused building land into use for public housing.

Gillian Noonan of the Anti-Eviction Task Force told the rally there are 428 families facing eviction before the courts, and she said that unlike those facing murder and rape charges, these families do not qualify for any free legal aid.

“One in three people are behind in the mortgage repayments in Ireland today, and that’s a staggering statistic – that’s one in three people on your street under strain waiting for the dreaded date in the eviction court and the prospect of being thrown out of their homes by thugs in balaclavas,” she said.

Bridget Carmody, co-ordinator of the Cork Traveller Women’s Network, said it was encouraging to see Travellers and settled people marching together for proper housing as Travellers had been living in atrocious conditions for decades in unsafe halting sites with no running water or proper toilets.

“After the Carrickmines fire tragedy in 2015 when ten Travellers lost their lives, the government carried out safety assessments on all Traveller sites and found that 80 per cent of Traveller accommodation is unsafe – the Government have known this for three years and [have] done nothing about it.

UCC student Anna Hevrin, speaking for the Union of Students of Ireland, said some 429 students were homeless on the night the 2016 census was done and claimed that figure is only likely to have increased as student accommodation has become even more unaffordable since then.

“The demand for student beds is expected to increase by 29,000 this year –- most students need affordable rents now as the rents being charged are unaffordable for the average students, and specially built student units are exempt from the rent cap so developers can set a higher market rent.”

Monday’s march was supported by several trade unions, including Siptu, Mandate and Forsa, while the march was also supported by Sinn Féin, the Labour Party, the Workers’ Party, the Green Party, Solidarity, the Social Democrats, the Communist Party of Ireland and Connolly Youth.

Covid-19: Taoiseach says next two weeks are going to be critically important 17:12
Man (50s) killed in single vehicle crash in north Co Dublin 16:59
No plan for legislation to close meat plants in cases of Covid-19 outbreaks 16:57
Accused claimed ‘I know what it’s like to be a murderer’, trial told 16:08
Bus Éireann to shut many inter-city routes due to financial pressures 16:00