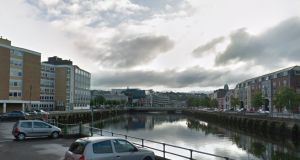 A new € 6 million plan to redevelop a historic part of Cork city centre into a public amenity while at the same time removing 80 per cent of the flood threat to city centre businesses has been given the go-ahead by city councillors.

Cork City Council last night voted by 22-6 to approve the public realm project for Morrison’s Island off the South Mall in the city centre, which includes plans by the Office of Public Works (OPW) to protect the area as part of its€140 million Lower Lee Flood Relief Scheme.

The vote at last night’s city council meeting followed a 90-minute debate by councillors and the decision was welcomed by Lord Mayor of Cork, Cllr Tony Fitzgerald, who pointed out that some 80 per cent of city centre flooding originates with tidal flooding at Morrison’s Island.

“This scheme will deliver a high-quality public amenity space for a long-neglected area of the city, but also the required level of flood protection for the wider city centre. Tonight’s vote will be warmly welcomed by traders who have suffered enormously in previous flooding events,” he said.

Details of the plan were unveiled in February when the then Cork City Council director of the environment, David Joyce, explained that Morrison’s Island was critical to any flood protection scheme for Cork as it was the source of much tidal flooding in the city centre.

When tidal flooding on the South Channel of the River Lee overspills on to Morrison’s Quay and Fr Mathew Quay, it flows down Fr Mathew Street and on to the South Mall and across Princes Street, Cook Street and Marlboro Street, on to Oliver Plunkett Street, he said.

Ken Leahy of Arup explained the flood protection measures along the 550 metre stretch of quays from Parliament Bridge past Trinity Bridge down to Parnell Bridge would involve raising road levels by 600mm and reshaping the camber of the road so it runs from the river towards the buildings.

The actual flood defences would consist of raising quay walls by 300-600mm, composed of concrete with granite coping and bollards, before erecting 1.2 metres of steel cabling which would allow pedestrians and cyclists using a 3m-wide promenade to have an excellent view of the river.

Mr Leahy said the plan would also involve reducing the amount of cars using the area, with the number of car-parking spaces on Morrison’s Quay and Fr Mathew Quay being cut from 148 to 33 – a loss of 115 parking spaces – as the plan seeks to attract more pedestrians and cyclists into the area.

Mr Owens said the CBA had estimated that the 115 parking spaces accommodated 2,500 to 3,000 turnovers a week and almost 150,000 turnovers a year – a serious loss of customers to a city still recovering from recession, a crippling bus strike and two major weather events.

Meanwhile, the flood protection element of the scheme has come under fire from the Save Cork City group, which is opposed to the OPW flood relief scheme and went so far as to organise an international design competition to come up with alternative plans for the Morrison’s Island area.

Architect Seán Antóin Ó Muirí of the Save Cork City group said people were fundamentally opposed to the current OPW plan as it was overly reliant on the building of 5km of concrete walls, which would reduce public access to both the north and south channels of the River Lee.