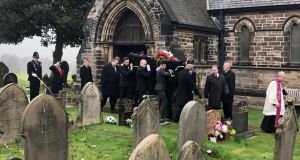 And the final hymn sung in tribute was John Bunyan’s To Be a Pilgrim, the opening line of which, “He who would valiant be”, struck an appropriate chord.

About 300 family friends, serving officers and former colleagues packed St Peter’s Church in the Cheshire countryside where Stalker, his late wife Stella and their daughters Colette and Francine spent most of their lives.

What shone through at an emotional and dignified service was the personality of a man whose character was tested in adversity, who was liked deeply by those who worked with him, and whose professionalism was respected and admired.

“He was a copper’s copper,” eulogised a former colleague, and a family man filled with enthusiasms (which included cars and playing the drums).

Integrity, single-mindedness, strength of character and courage were words used by the Rev Canon Michael Burgess in his opening remarks.

A grandson, Jonathan Cartwright, revealed that “Pops”, as he was known to his six grandchildren, was a man with a wild imagination who told them adventurous stories made up for bedtime. He invented characters that inhabited local parks and woods, and was forever taking them to museums in Manchester.

Stalker, who died aged 79 on February 15th, joined GMP as a cadet in 1956. He rose steadily through the ranks in the 1960s and 1970s becoming, in 1978, the youngest detective chief superintendent in Britain, and, along the way, investigating the Moors murderers Myra Hindley and Ian Brady.

As assistant chief constable of GMP he achieved the rare distinction of being sent to the Royal College of Defence Studies to study terrorism.

In 1983, he was appointed to investigate an alleged “shoot-to-kill” policy in the Royal Ulster Constabulary (RUC). It centred on the deaths in late 1982 of six people: IRA members Gervais McKerr, Eugene Toman and Seán Burns, shot dead at a Lurgan road block on November 11th; Michael Tighe (17), shot dead in a hay shed near Lurgan on November 25th; and Seamus Grew and Roddy Carroll, two INLA men shot dead on December 12th at Mullacreavie in Armagh.

Appointed in May 1984 to investigate the killings, after several RUC officers were acquitted of murder, Stalker hit a wall of obstruction from within the force.

After a year, Stalker asked chief constable Sir John Hermon to suspend two senior officers in the RUC special branch but he refused.

Stalker zoned in on the killing of Michael Tighe, who had no known paramilitary connections. It transpired that the hayshed in which he had been shot contained two geriatric and unusable guns, and was bugged by MI5, the UK’s internal security agency, with the tape recorder operated by RUC police officers.

Stalker demanded a copy of the tape and/or the transcript but Hermon refused. Stalker went directly to the agency and it said it did not support Hermon’s opposition to him getting the tape.

But Hermon continued to refuse and Stalker said he was going to consult the then British home secretary, Douglas Hurd.

None of this was known to the wider public and, two days before he was due to return to Belfast in May 1986, Stalker himself was suddenly suspended from duty and removed as head of the investigation.

The explanation given at the time was that allegations had been made that Stalker had underground criminal associates in Manchester.

It proved to be nonsense and Stalker was restored to his position in Manchester, but not on the shoot-to-kill inquiry, notwithstanding the Orwellian explanation floated at the time that he had been taken off it only to preserve it.

Stalker resigned from the police in December 1986.

He had been horrified at what he found in Northern Ireland. He was not naive (nor influenced by having Irish antecedents, of which he was reminded by Hermon) but once said to this reporter of those who had died: “None of the five deserved to die as they did and Michael Tighe didn’t deserve to die at all.”

Many colleagues believe, and said so after the service, that he was sacrificed at a political level because of the trauma that would have resulted had his findings been followed through on.