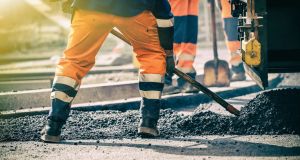 The public works contract awards deals on the basis of the lowest price submitted. Photograph: iStock

Data released to The Irish Times relates to 15 road projects with a tender price of more than €40 million, between 2008 and 2018.

Ultimately, just under €270 million was paid above the tender price, with the bill for all the projects coming in at €2.02 billion.

Transport Infrastructure Ireland (TII), which manages major State transport projects, said that although payments were above tender prices, the combined total paid out for the roads projects came in under budget.

Full budgets for each project include contingency and other sums on top of the tender price. Individual project budgets are commercially sensitive, but TII said the combined construction budgets for the 15 projects was €2.3 billion, meaning they came in 11 per cent below target.

However, sources across the infrastructure sector said the variation between tender sums, payments and sums sought was the product of a fraught process rooted in the type of contract governing the majority of projects.

The public works contract awards deals on the basis of the lowest price submitted. Peter Walsh, the chief executive of TII, said: “The contract is given to the lowest tendered price, so the contractors have to take an optimistic view as to how the project will proceed,” adding that bidders “can’t expect” to win a contract otherwise.

“You will never outturn at the tendered price, because it is the most optimistic view of how things might occur.”

“This type of public works contract would not be appropriate for mega-projects like the Metrolink,” he said. Two other types of contract – a New Engineering Contract (NEC) and a so-called “Fidic” contract – would be more appropriate, he said.

TII has used these contracts on a trial basis, and the approval process to allow them be considered as an option for infrastructure projects is under consideration, having been supported by the Office of Government Procurement.

A spokesman for the Construction Industry Federation said the current contract places “all risk for any eventuality on the contractor”, and that it has sought “more collaborative contract modes” such as the NEC.

“Unfortunately the public sector is constrained by legislation to select the lowest cost bidder in a tender process in the vast majority of contracts. The system rewards the lowest bidder, not necessarily the optimum bid.”

A spokeswoman for the Department of Public Expenditure said most projects were delivered on time and on budget, but “more needs to be done to continue to strengthen and improve processes and frameworks to ensure value for money”. The department said it was strengthening frameworks to support public bodies delivering major projects.

The data released to The Irish Times details 15 roads projects with a total spend of €2.02 billion. This is more than the tender prices agreed, which came to €1.75 billion, but less than the €2.6 billion that was submitted in claims by the contractors. The average difference between the tender price and that paid out was 15 per cent.

The most expensive project in the data released was the €245 million Cashel/Mitchelstown project, which came in slightly below tender price. Other projects were significantly above the agreed tender, such as the Kilbeggan-Moate-Athlone road, which came in at €145 million compared to the €113 million tender; and the Athlone/Ballinasloe road, which was €100.1 million compared to €79.1 million at tender. A project between Kinnegad and Kilbeggan tendered at €108.8 million, and cost €137 million.

Overall, the roads projects came in on budget, as the total construction budget - which includes contingency funds and is only published in aggregate - came in at €2.3 billion.