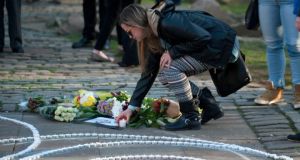 A silent vigil for Karen Buckley near her home in Glasgow: Scottish authorities said it would be a number of days before they could release her body to be taken back to Cork. Photograph: PA Wire

The parents of murdered Cork woman Karen Buckley have returned home to Mourneabbey, Co Cork, to prepare for the funeral of their daughter whose body remains in Scotland

John and Marian Buckley flew back from Edinburgh on Saturday evening after being informed by Scottish authorities it would be a number of days before they would release their daughter’s body.

The Department of Foreign Affairs yesterday confirmed that the Irish Consul General was providing assistance to the Buckley family in their efforts to get their daughter home as soon as possible.

“Our consul general in Edinburgh has been providing consular assistance and remains in contact with the family and the Scottish authorities,” said a department spokesman.

The Irish Times understands from informed sources that it may be Wednesday at the earliest before the body of the 24-year-old occupational therapy student will be released.

Parish priest Fr Joe O’Keeffe urged people to support the Buckley family in every way they could over the coming days as they struggled to cope with the enormity of their loss.

“We are called to be witnesses, to be witnesses with every fibre of our being, particularly in the light of the tragedy of the last week for the Buckley family,” he told the congregation at the Church of St Michael, the Archangel in Analeentha.

“We are an Easter people, a people of hope and we hope and pray that Karen is now at peace.

“And we hope and pray that Karen’s parents, John and Marian, and her brothers, Brendan and Kieran and Damian, will find the strength that they need at this time.”

Meanwhile the organiser of Friday’s vigil for Karen in Glasgow, former member of the Scottish Parliament Rosie Kane, spoke of the great courage and resilience shown by Karen’s parents.

John and Marian Buckley attended the vigil in George Square at 5pm on Friday and spoke briefly to Ms Kane who said she organised the vigil to show the family that Glasgow felt their pain.

“They were just standing at the back but they felt so moved that they came forward to read the many tributes and then they just came over to me to thank me,” said Ms Kane.

“We were astonished that here, at this time of such grief, that they would honour us by coming to the vigil. We just hope it showed them that Glasgow cares and it helps them in some small way.”

Young couples, groups of women out for the night as well as men continued coming to the Sir Walter Scott monument well after midnight to read the messages of sympathy and remember Karen.

A candle flickered in front of a large picture of Karen smiling out at the world, placed there earlier in the evening by her parents and brother Kieran when they attended the vigil.

In front lay a piece of cardboard, with a message from an ordinary Glaswegian seeking to put words on their feelings: “Shine on, you diamond – you will always be remembered by the people of this great city – sleep well, Karen.”