Coalition rocked by resignations amid public fury over golf dinner 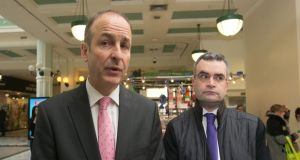 The Coalition was plunged into the worst crisis of its eight-week life on Friday after being rocked by the resignation of Minister for Agriculture Dara Calleary following controversy over the Oireachtas golf dinner.

Politicians in all parties reported a wave of intense public anger following the revelation that the Oireachtas golf society held a dinner in Clifden, Co Galway attended by more than 80 people in apparent contravention of Covid-19 restrictions. TDs said they had rarely witnessed such a depth of feeling on a political issue.

The three party leaders held an emergency meeting on Friday morning as the controversy raged and agreed to maintain a joint approach to the crisis. Later the Green Party issued a statement calling for the Government to put the affair behind it.

Senior figures in the three parties stressed the event had nothing to do with the Government, though sources conceded the impact on public trust in Fianna Fáil and Fine Gael politicians generally could harm co-operation with lockdown restrictions.

The event is now the subject of a Garda investigation for possible breach of restrictions.

Under Covid-19 regulations it is a criminal offence to organise an event with a larger number of people than is permitted by the regulations.

Mr Calleary resigned on Friday morning after it was revealed he attended the event organised by the Oireachtas Golf Society, a group of current and former politicians and friends. He became the second Cabinet minister to depart since the Government was formed less than two months ago. The leas-cathaoirleach of the Seanad, Fine Gael senator Jerry Buttimer, also resigned, while Fianna Fáil and Fine Gael Senators who attended were told they would lose the party whip.

But European Commissioner Phil Hogan said he would not resign, insisting he believed the event had been organised in accordance with Government guidelines. Taoiseach Micheál Martin said Mr Hogan should apologise and acknowledge public outrage about the event, but did not call for him to resign. In a statement later on Friday, Mr Hogan’s spokesman said the commissioner “does apologise for any distress caused by his attendance”.

The newly appointed Supreme Court judge Séamus Woulfe also issued a statement expressing his apologies for attending, as did the former RTÉ broadcaster Sean O’Rourke and a number of other attendees.

The acting chief medical officer Dr Ronan Glynn said there was a “very justifiable and understandable anger today over what happened in Clifden and it is not misplaced”. It was very clear what happened was not in line with public health guidance, he added.

Since late June, indoor gatherings have been restricted to 50 people under the Government’s public health controls in a bid to stop the spread of Covid-19. Further restrictions announced this week identified only weddings and artistic and cultural events as being allowed to have groups of up to 50.

A further 79 cases of Covid-19 were confirmed in Republic on Friday, with no new deaths reported.

Sinn Féin leader Mary Lou McDonald said the event was “the last straw” and the Government had “descended into new levels of chaos”. Labour leader Alan Kelly said the Dáil had to be recalled. “I’ve never seen such public anger on an issue so quickly.”

But the Taoiseach rebuffed opposition demands to recall the Dáil, saying the Government’s priority was to ensure a safe reopening of schools at the start of September.

Meanwhile, the Garda public order unit is being put on standby ahead of an anti-lockdown and anti-facemask protest due to take place in Dublin today.

Gardaí fear public anger at the Oireachtas Golf Society scandal, combined with the possibility of left-wing counter-protests, could lead to disturbances and clashes.