Little relief on first anniversary of Bangladesh disaster which killed more than 1,100 people 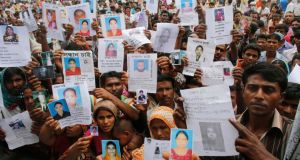 Relatives show pictures of garment workers believed to be trapped under the rubble of the collapsed Rana Plaza building last year. Clothes brands have been criticised for not doing enough to help families of victims. Photograph: Reuters

A call has been made for well known clothes brands to make “immediate and significant” payments to a fund set up to raise money for the victims of a fire in a Bangladeshi factory in which over 1,100 people died.

The first anniversary of the fire at the Rana Plaza, which highlighted the appalling safety conditions in the country’s €16 billion garment industry, is being marked today by the Clean Clothes Campaign Ireland.

The campaign highlights some well known brands which had production facilities at the factory including Benetton, Iconix - which trade under the Lee Cooper name - and US retail giant JC Penney

The campaign said the muli-national companies had failed “to provide the adequate funding to ensure all the survivors and the families of the 1,138 who were killed in the worst industrial incident to hit the garment industry are able to receive payments to cover loss of income and medical expenses”.

It said the in spite of a groundbreaking agreement between brands, the government of Bangladesh, employers, international and national unions and NGOs to develop an inclusive, transparent compensation programme the voluntary fund “remains woefully underfunded”.

A year after the collapse brands and retailers have contributed just $15 million to the Trust Fund, just one third of the $40 million needed. “Brands are failing workers a second time,” said the campaign spokeswoman Kate Nolan. “First they failed to ensure the factories they bought from were safe, and now they are failing the survivors and the families of those who lost loved ones, by not contributing significantly to the Donor Trust Fund.”

Primark was the first company to pay fully into the fund and it was first on the ground and they have performed well,” Ms Nolan told The Irish Times .

She said people could not understand why other companies had been so slow to help the victims of the disaster. “It is just 0.2 per cent of their combined profit. It is quite shocking that they are not prepared to pay anything into it.”

Memorials, rallies and events are being held in over 20 cities worldwide; including demonstrations in front of stores in Dublin, Toronto, New York, Antwerp and Istanbul, debates on the impact of the disaster on the fashion industry in Melbourne and The Hague; and in Bangladesh workers and union members will be holding commemorative events including a human chain at the site of the collapsed building in Dhaka.

“Fourteen major brands have contributed just US$7 million between them, brands that include the world’s largest retailer Walmart,” says Phillip Jennings of UNI Global Union. “It is inexcusable that Walmart has only contributed $1 million to the Fund. We’re calling on the company to make a donation which reflects their size and responsibility as a buyer in Rana Plaza.”