Arson attack at home in Dundalk leaves five in hospital 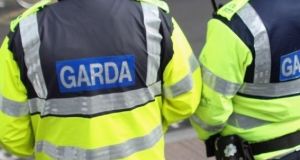 The scene is currently preserved for a technical examination

Gardaí are investigating what they believe was an arson attack on a home in Dundalk, Co Louth on Sunday morning, which resulted in five people being taken to hospital.

The fire at a house in the town’s Clontygora Court was spotted about 3.35am by local residents who also reported hearing a loud bang.

The five occupants of the house were taken to Our Lady of Lourdes Hospital, Drogheda, with what are described as non-life threatening injuries.

No other injuries were reported and the fire was extinguished by local Fire Services.

The house was significantly damaged during this incident. The scene is currently preserved for a technical examination and a full investigation is under way.

Gardaí in Dundalk said they were appealing for any witnesses to the incident or anyone with information to come forward.

They are also appealing for any road users who may have camera footage (including dash-cam) who were travelling in the areas of Clontygara Court and Hoey’s Lane between 3am and 4am to make this footage available to gardaí.