Sonas chief: ‘I genuinely don’t think we could have done anymore than we did’ 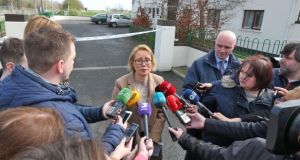 Sonas chief executive Fiona Ryan said it took steps above and beyond simply complying with fire regulations to ensure the safety of the families living in the step-down accommodation for victims of domestic violence. Photograph: Colin Keegan

The domestic abuse charity which provided the accommodation for those killed in the Clondalkin fire in Dublin said it did all it could to ensure that fire safety procedures were followed.

Sonas chief executive Fiona Ryan said it took steps above and beyond simply complying with fire regulations to ensure the safety of the families living in the step-down accommodation for victims of domestic violence.

Annmarie O’Brien (27) and her daughter Paris (2), as well as Holly O’Brien (3) and Jordan O’Brien (4) died in a fire in an apartment in a step-down facility run by the Sonas housing body.

Ms Ryan said Sonas was in the dark as to what caused the fire which led to the death of a woman and three children in the early hours of Wednesday morning.

“We haven’t heard a thing, but we really want to know,” she said. “Three families had to be rehoused at very short notice.

“When it comes to procedures and equipment, I genuinely don’t think we could have done anymore than we did.

“From communication to fire safety procedures, we take our obligations very seriously.”

Neither the Garda nor Dublin Fire Brigade would comment on the ongoing investigation into the cause of the fire, though arson is not suspected.

However, on Thursday gardaí sent an electrician as part of its technical team to examine the apartment where the fire broke out.

Ms Ryan outlined a long list of things that Sonas had done to ensure that all the apartments at Cluainin Cronan in Clondalkin adhered to the highest standards of fire safety.

A fire blanket was installed in July in the apartment where the fire broke out in July and a carbon monoxide detector in it was last tested on August 18th, 2016.

The fire alarm panel and emergency lighting in all properties are serviced quarterly. The last service was on January 31st.

Fire alarms in Sonas-supported housing are linked to an external monitoring centre. She said this is not a requirement for such apartments, but an additional measure Sonas had in place.

There were three fire extinguishers on the stairwells of the ground floor, first floor and second floors which were only serviced on Monday.

Smoke and heat detectors linked to the fire panel are serviced annually in all Sonas apartments and that has “taken place consistently”, she stated.

There is a heat detector inside the front door of the apartment which is linked to the fire alarm panel which is serviced quarterly.

In all apartments there are two other detectors: one in the hallway which is a smoke detector and one in the kitchen which is a heat detector.

Ms Ryan said clients are responsible for internal detectors outside of these times. Each is given a leaflet about fire safety in the home and a form to sign regarding their obligations around fire prevention in the home including detectors.

She said Sonas staff talk through the form with clients for clarity and also to ensure clients with literacy and/or language challenges understand what is being asked.

“We last wrote to all clients about fire and carbon monoxide safety in the home on November 29th, 2016,” she said.

“This communication among others reminded clients to test their detectors and report immediately any faults or repairs required.”

In addition, all boilers are serviced annually and all boiler servicing is up to date across all Sonas properties, she said.