Risk-taking PSA jubilant as Peugeot scoops Car of the Year

Geneva show could be more about selling companies than cars 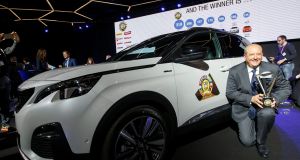 From hell to heaven is how Peugeot’s chief executive described the brand’s victory in Europe’s Car of the Year awards. Peugeot’s Jean-Philippe Imparato was referring to the changing fortunes of the brand over the past five years.

He could equally have been talking about the French firm’s takeover of Germany’s Opel brand from its US parent General Motors.

Peugeot’s 3008 crossover SUV picked up the coveted Car of the Year award on the eve of the International Geneva Motor Show, the annual industry showcase. The car was conceived and developed during a time when the very future of the PSA group – owner of the Peugeot and Citroen brands – was in question. The phoenix-like recovery of the firm, courtesy of Chinese investment and French government help, epitomises the tumultuous nature of the modern motor industry.

The takeover of Opel is the biggest in the auto industry since Fiat bought Chrysler at a knock-down price from the US government in the wake of the global recession, and it’s likely to trigger a major round of mergers and acquisitions, with smaller brands vulnerable to buyouts. This week’s Geneva motor show could become as much about selling companies as selling cars.

PSA itself is taking a massive risk here. Opel has lost money every year since 1999, and has drained the coffers of General Motors to the tune of some €8 billion in just the past eight years. PSA will now be trying to juggle all its brands, which operate in roughly the same space in the market.

Meanwhile, Vauxhall has been kept going up to now by General Motors because it sells well in the UK market. However, it’s hard to see a French car-maker, 14 per cent owned by the French government, stepping in to save a post-Brexit car brand with little relevance in Europe or the rest of the world.

An unexpected winner could be Fiat-Chrysler. Fiat has been cosying up to General Motors for years as a possible investor or owner, and the hiving off of Opel could well open up a clearer opportunity for General Motors to invest in a Euro-centric car maker with no worries about competing with its own brands.

The future may well depend on whether PSA wants another mainstream car brand, or whether its endgame here is actually to shut down a major competitor.