Stephen Collins: London’s next U-turn may be on free trade 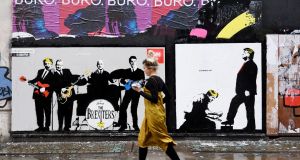 The continued confusion in the House of Commons over Brexit and the likely length of any extension has obscured the key development as far as this country is concerned: whatever else happens there will be not be a border on the island of Ireland. That represents a remarkable triumph for Irish politics and diplomacy. It is a vindication of the potentially risky backstop strategy adopted by the Government that when it came to the crunch the British blinked and shied away from the appalling vista of a no-deal Brexit.

It is also a tribute to the skills of Michel Barnier, who led the EU negotiating team, and to the solidarity of the EU member states. To the astonishment of the British they were unwavering in their support for Barnier’s strategy and his calm and determined dealings with a succession of UK politicians and senior public servants.

In the face of that solidarity, Boris Johnson abandoned his much-vaunted attachment to keeping a no-deal option on the table and proceeded last week to sign the agreement with the EU. In the process, he abandoned the DUP as well as his opposition to a further extension of British membership, despite his “die in the ditch” pledge a few weeks earlier.

In the end, his series of U-turns enabled him to do what many thought impossible. He got a majority the Commons for a deal, even if a majority of MPs rejected his timetable for its implementation. “One way or another we will leave the EU with this deal to which this House has just given its assent,” he told the Commons on Wednesday night.

Johnson was forced to backtrack by two implacable forces. One was the damage a no-deal Brexit would have done to the British economy. The other was that it was finally brought home to him that a border on the island of Ireland would represent a betrayal of the UK’s international treaty obligations under the Belfast Agreement.

The convulsions in British politics created by the Border are something that nobody in the UK envisaged at the start of the process. It was reported that, during one of her earlier meetings with Barnier, Theresa May pointed to the continuing importance to the EU of the UK, given that is the fifth-largest economy in the world with a still formidable military capability, by contrast with the claims of a small country like Ireland. Apparently she was taken aback when Barnier patiently explained that Ireland, as a continuing member of the EU, would have the full backing of the remaining 27 while the UK as a departing state could not expect any special treatment.

The respected commentator and former Downing Street adviser Camilla Cavendish put it succinctly in last weekend’s Financial Times. “If the past three years have taught us anything it is that EU solidarity is unshakable. British ministerial bluster has come up repeatedly against the technocratic implacability of a very large trading bloc. Dublin has been stronger than London, possibly for the first time in Anglo-Irish history.”

The inability of the British political system to understand its relative weakness in negotiating with the EU, and its initial lack of concern about the impact on Ireland, created the conditions in which the House of Commons descended into the political instability and chaos that has done irreparable damage to the UK’s standing in the world.

It is something to which all of the political parties at Westminster have contributed in one way or another. The right wing of the Conservative Party and the DUP have to take primary responsibility for the way they sabotaged Theresa May’s deal three times. That the same Tory ultras then abandoned the DUP when the chips were down was poetic justice. One DUP MP was reported to have bewailed to a mainstream Conservative Party colleague in recent days that he should have voted for May’s deal and never have trusted the English nationalists.

The Labour Party too must accept responsibility for cutting off its nose to spite its face. It played party politics to sabotage the May deal only to end up with a potentially much worse deal for working people under Johnson. Labour’s behaviour throughout has been a mixture of political cynicism and incompetence.

Mind you, the fact that Johnson is committed to a much harder form of Brexit than that envisaged by May does not mean that is where the UK will ultimately end up. The prime minister has shown a willingness to abandon one position after another and there is every prospect that he will retreat once again if and when his free trade position becomes untenable.

Negotiations on the future trading arrangements between the UK and the EU will only begin when the withdrawal agreement is finally ratified. Those trade talks are due to conclude by the end of next year but nobody who knows anything about how such talks work believes this timetable can be met. If the experts are right and the talks drag on for years, the realisation may well dawn on Johnson, or whoever else might be in power in London at that stage, that a close trading arrangement with the EU is a far better option than the mirage of free trade deals with far-away places.

1 Eating out in Dublin – the homeless way
2 Irish Times poll: Large majority want change of government
3 Fianna Fáil may have just pressed the pause button on the property market
4 ‘In Ireland I’ve found another form of persecution’
5 Which jobs do teenage girls and boys aspire to have by age 30?
Real news has value SUBSCRIBE