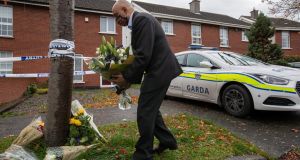 Indian Ambassador to Ireland, Sandeep Kumar places flowers at the house at Llewellyn Court, Ballinteer where a young mother and her two children were found dead on Wednesday. Photograph: Colin Keegan, Collins Dublin

Faizan Syed and Asfira Riza, the children found dead in their home in south Dublin on Wednesday, will be “greatly missed” by everyone who knew them, their school principal has said.

Orlaith Curran, principal of Ballinteer Educate Together, said staff at the school was receiving support from psychologists to prepare for the return of the murdered children’s school mates next week.

Asfira Riza (11) and her 6-year-old brother Faizan Syed were found dead in a bedroom of their home on Llewellyn Court, Ballinteer, on Wednesday. The remains of their mother, Seema Banu, were found in another bedroom of the family home.

Gardaí believe the children were murdered and a post mortem was awaited on Thursday to determine their mother’s cause of death, with foul play not ruled out.

Ms Curran said in a statement on behalf of the school that the deaths of the children and their mother was a “terrible tragedy for their family, our school” and the wider community.

“We are deeply saddened by these devastating events. Our sympathy and thoughts are with the children’s family and friends,” she said.

Ms Curran added Faizan Syed was in first class and his sister Asfira was in sixth class.

“They will both be greatly missed by all who knew them. Offers of support have been pouring in and are greatly appreciated.”

She explained the school had implemented its ‘critical incident management plan’. Psychologists from the National Educational Psychological Service had on Thursday been “supporting and advising our school staff in preparation for the return of our students from the mid-term break”.

The Educate Together national office said it had learned of the children’s deaths “with great shock and sadness”, adding it was an “awful tragedy”

“Words fall short of expressing the shock and profound sadness many are feeling when thinking about the children and family affected. Our hearts are with the family, friends and classmates of the bereaved,” it said.

Ballinteer Educate Together National School said it had no plans to make any further comment at this stage.

Gardaí are continuing to speak to the children’s father, a man in his 30s, who presented himself at Dundrum Garda station on Wednesday. No arrests have been made and a formal murder investigation has not yet been launched.

Last night, 200 locals gathered at a makeshift memorial near the family’s home to mourn the deaths.