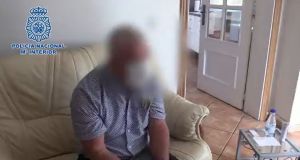 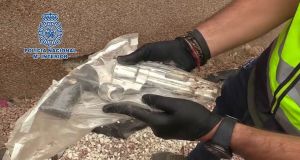 A videograb issued by Policia Nacional of a Colt Python revolver that was foundduring the arrest of John Gilligan in Alicante, Spain. Photograph: Policia Nacional/PA Wire

Dublin criminal John Gilligan was growing in confidence that he could retake a place in the Irish drugs trade as he slowly expanded a modest drugs and gun smuggling business over the last 18 months, Garda officers familiar with his case believe.

Gilligan was freed seven years ago after 17 years behind bars, mostly for drug crime, and had been struggling to raise any money from his former gangland associates.

Senior detectives said that despite being targeted in several gun attacks in the Republic after his release, Gilligan believed he could break back into the drugs scene once he gathered enough money to source product in larger quantities.

They added the fact he had been able to make a number of drugs deliveries from Spain, via the postal service, to Ireland and the UK and had also delivered at least three loaded firearms to a criminal group in Ireland, showed he had made progress since being released.

However, security sources in Dublin said they doubted the Colt Python revolver found when he was arrested in southern Spain last week was the same firearm used to shoot dead Veronica Guerin in 1996. They expressed surprise the Spanish authorities had stated publicly that the gun was being checked for possible links to the journalist’s killing.

“It’s possible it’s the gun, as in ‘anything is possible’. But we’re not aware of any evidence that would lead you believe this is the same gun,” said one source, adding gardai were still awaiting the results of ballistics testing on the revolver in Spain.

A number of experienced Garda officers said while Gilligan was now 68, the security threat he had begun pose was “not insignificant” as he was dealing in firearms as well as drugs.

“It looks like he had nothing when he came out of prison but he had managed to get himself out of that position,” said one source.

Another senior officer said the fact Gilligan could source firearms in Spain and had also lined up people in Ireland who wanted the guns and were willing to pay for them was very strong evidence he had “found a place in the market” and was exploiting it.

Gardaí are aware of at least three firearms that were supplied by Gilligan to an Irish criminal gang, which were loaded and also supplied with extra ammunition, all of which were seized in the Republic earlier this year.

But while expanding what was a modest drugs and gun trafficking business, and starting to achieve scale, Gilligan was being watched by the Spanish authorities, culminating in his arrest in Spain last week.

The Dubliner and five other people were all arrested last Wednesday in Alicante as part of a pre-planned operation by the Spanish National Police, supported by the Garda and the UK’s National Crime Agency. The search operation saw armed police storm a house Gilligan was staying in, and was part of a wider investigation into criminals using the postal service to send “marijuana and hypnotic drugs to the United Kingdom and Ireland”.

Spanish police confirmed the arrest of the six suspects as well as the seizure of 4kg of cannabis and 15,000 pills in the search as well as the Colt Python revolver, which had been buried in the ground.

A further 4kg of cannabis and 11,000 pills were also found packed into parcels at four other properties.

Gilligan remains in custody in Spain where he could be held for up to two years without charge as the investigation into him continues.

No benefit to mask outdoors when socially distancing, says professor 06:39
Covid-19: Those planning to visit older relatives at Christmas ‘should stop socialising now’ 06:37
Air pollution in Dublin reaches back to smoky coal days 03:12
Covid crisis: Health experts urge caution over Christmas as lockdown ends 03:00
‘Sageing’ cohort among us can savour the satisfaction of growing old 01:10