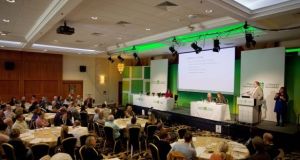 Members of the Citizens’ Assembly have voted overwhelmingly for a comprehensive Government regime to tackle climate change.

The 75 members of the assembly have mandated the Government to ramp up measures to mitigate Ireland’s greenhouse gas emissions.

All but one of the members voted yes to the proposition that climate change should be at the centre of policy-making in Ireland.

The proposition included a measure that “as a matter of urgency” a new or existing independent body should be resourced appropriately to address climate change.

The assembly met over two weekends to discuss how Ireland could be a leader in tackling climate change.

All 13 proposals to tackle climate change were passed by a large majority of members.

Having heard from numerous experts, the members opted by a margin of 65 to eight (with two invalid votes) that there should be a tax on greenhouse gas from agriculture despite warnings from the Irish Farmers’ Association that such a move would be impractical.

The proposition also included a proposal that farmers would be rewarded for land measures that sequesters carbon such as the planting of trees.

Members voted by a margin of 68 to 6 (with one abstention) in support of the proposition that the State should spend at least twice as much on the funding of public transport as they do on the road infrastructure.

The members voted 73 to 2 that all subsidies for peat should be ended, though most voted for subsidies to be phased out over five years.

Four out of five members voted yes to the proposition that they would be willing to pay higher taxes on carbon intensive activities provided that money was ring-fenced for climate action measures.

There was also substantial support for an increase in the numbers of bus lanes, cycle lanes and park and ride facilities with 93 per cent in favour, mandatory reporting of food wastage (93 per cent) and unanimous support that communities should be given a share in local renewable energy products.

Citizens’ Assembly chair Ms Justice Mary Laffoy said she knew little about climate change before the members started their deliberations three months ago, and many of the members did not either.

She said she was “gobsmacked” by the level of engagement among members of the assembly.

The Stop Climate Chaos coalition described the the outcome of the Citizens’ Assembly as “a clarion call for the Government to immediately step up climate action”.

Friends of the Earth director Oisín Coghlan said, “These common-sense, practical recommendations for climate action will not get us from laggard to leader. But they will allow us to catch up with our European neighbours. If implemented by Government they will end nearly a decade of dithering and delay.”

1 Mary Lou has to call for the smelling salts as SF councillor deals a knock-out blow
2 Murdered and mutilated: Keane Mulready-Woods and the teenagers of gangland
3 Who was murdered teenager Keane Mulready-Woods?
4 Dublin gangland figures involved in Drogheda feud that killed 17-year-old
5 Teenage boys and organised crime gangs: A complicated dynamic
Real news has value SUBSCRIBE