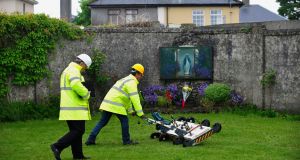 Image of engineers using ground penetrating radar at the site of a mass grave of up to 800 children at the former Mother and Baby home in Tuam, County Galway. Photograph: Aidan Crawley/EPA

A Catholic bishop has told the Citizens’ Assembly that the revelations from Tuam made us “hang our heads in shame”.

Bishop of Limerick Dr Brendan Leahy said he was as surprised as anybody else by the news that the remains of hundreds of babies and young children were found behind a septic tank on grounds once owned by the Bon Secours Sisters.

During the questions and answer session at the assembly, a citizen from Tuam asked Bishop Leahy, who was representing the Irish Bishops’ Conference, how they could square their concern for the unborn with what happened in Tuam between 1926 and 1961.

She said: “How does the Church expect us to go along with this given the horrific track record that the religious orders has when dealing with the most vulnerable as you call them, the voiceless weak in our society historically. And specifically, in light of the discovery of the recent discoveries of the 780 babies thrown into septic tanks in Tuam?”

The Irish Catholic Bishops Conference presentation to the assembly members was made by Kate Liffey, its national faith development team co-ordinator.

In response to the question, she said she had spent the weekend “deeply upset by myself” as an ordinary Catholic and had considered pulling out of the assembly.

However, she stated that she decided to proceed with the presentation because “I believe passionately as a human and as a Catholic in the right to life of the unborn child.

“That is not to diminish in any way what is happening in the past. It is simply to say that this is the question of what we were to look at today.”

She conceded that the debate on abortion is happening in very changed circumstances to the last referendum in 1983. “It is a very changed reality. There are lots of different perspectives.”

Bishop Leahy said the news from Tuam amounted to a “renewed wake up call to us all”.

He added: “It brings us back to what we want to promote a culture that really does care for life both before and after birth.”

Another citizen said they had heard personal testimony from women who had been forced to travel to Britain for an abortion and had found the experience “stressful, expensive and degrading”.

The conference was asked what solutions it had for the thousands of Irish women who travel to Britain for an abortion.

Atheist Ireland told the assembly that the 1983 referendum was religiously motivated.

Atheist Ireland’s Ashling O’ Brien said the Irish State had tried to claim there was a settled will in Ireland as regard the morality of abortion, but that there is no settled consensus in the country.

She told assembly members that it was wrong to impose a religious morality on people who did not share that view.

Bishop of Cashel, Ferns and Ossary Rev Michael Burrows said the Church of Ireland believed the constitution was not the place to deal with a complex issue such as abortion.

He said the Church was only in favour of abortion in situations of “strict and undeniable medical necessity” and those circumstances should be addressed through “nuanced legislation”.