Analysis: Releasing files might cause danger to individuals or lead to defamation action 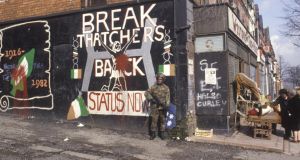 A bundle of certificates signed off by the Taoiseach’s office and, in some cases, by Garda special branch, offers a tantalising glimpse of the kind of information the Government considers too sensitive to let the public see, even 30 years on.

Files from 1981 to 1984 containing information about Northern Ireland, about bombs in London, about the hijacking of an Aer Lingus plane and about the Whiddy Island disaster, were all withheld from the National Archives.

Traditionally, journalists spend several days at the national archives every December poring over batches of files released under the 30-year-rule in an effort to shed some light on historic events and political issues.

But some files are not released and, under the National Archives Act, certificates must be issued to state why.

Reasons may include that it would be contrary to the public interest, that it would be a breach of statutory duty, that releasing them might cause distress or danger to living individuals, or that the release might be likely to lead to a defamation action.

Some files withheld were signed off by the Garda special branch as they related to criminal intelligence matters.

A file marked “Comment on the suggested approach to Mrs Thatcher – list of media contacts” dated 1980 to 1983 was withheld.

Correspondence from members of the public to prisons in Northern Ireland during the hunger strikes of 1981 also remain under wraps.

Records of US reaction to the hunger strikes were also withheld by the Department of Foreign Affairs.

Another Department of Foreign Affairs file held back is titled “Alleged links between elements in Iran & the IRA”.

Details of the hijacking of an Aer Lingus aircraft en route from Dublin to London were also withheld.

The 1982 file may refer to Aer Lingus flight EI 164, which was hijacked with 113 passengers and crew on board the previous year.

The Attorney General’s office also held back records from 1978 to 1982 relating to the remuneration and pension of the chief executive of Aer Lingus.

A file on the showing of “pornographic films” in a pub in Dublin’s north inner city in 1982 was also held back by the AG.

“Much of this may be coming from people of unsound mind,” a note on the schedule of withheld files states.