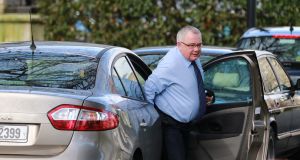 Ceann Comhairle Seán Ó Fearghaíl would not be drawn on whether his proposal followed controversial comments made by Peter Casey in the presidential election campaign. Photograph: Nick Bradshaw

A member of the Traveller community could be appointed to the Seanad by the Taoiseach to ensure representation of this ethnic group in the Oireachtas, Ceann Comhairle Seán Ó Fearghaíl has suggested.

Mr Ó Fearghaíl said a new Oireachtas committee could also be established to examine problems affecting Travellers, as well as relations between them and the settled community.

“We need to look at the possibility of Traveller representation in the Oireachtas which could be achieved in the context of Seanad reform, or through the Taoiseach’s nomination,” he said.

The Kildare South TD will bring the committee proposal to the Dáil’s business committee in January, but raised the appointment of a Traveller to the Seanad only as a suggestion.

Mr Ó Fearghaíl also suggested a special rapporteur could be appointed to deal with Traveller issues, similar to how Dr Geoffrey Shannon was appointed rapporteur on child protection issues by the Government.

“The biggest issues facing the Traveller community are their health and accommodation needs. Their education needs and the fact that something like 80 per cent of Travellers are registered as unemployed,” he said. “They are the biggest issues facing them. But of course the question of the minority of Travellers being involved in anti-social behaviour is a problem you’ll hear about right across the country. Much of it is anecdotal.

“I would like to think it would be addressed in an open and transparent way by this committee if we get agreement to set it up.

So why this initiative now?

He would not be drawn, however, on whether his proposal followed from controversial comments made Peter Casey in the presidential election campaign earlier this year. Mr Casey, who finished a second to Michael D Higgins, said Travellers should not be recognised as an ethnic minority because they are “basically people camping in someone else’s land”.

The Ceann Comhairle traditionally remains above party and other contentious areas of politics.

The proposed committee, said Mr Ó Fearghaíl, builds on work already carried out by Independent Senator Collette Kelleher and Labour TD Jan O’Sullivan. The Ceann Comhairle met their informal group and representatives of the Traveller community and said resources are available within the Oireachtas for the new committee because the Committee on Climate Action is concluding its work.

The proposed committee would be time limited. It would report within four to six months on issues “that are important to the Traveller community” such as housing, health, education and employment.