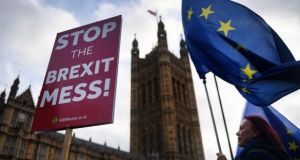 The Irish Pharmacy Union said the contingency plan for a no-deal Brexit was ‘long overdue’ but the pharmacies needed ‘clear guidance and practical solutions’ to benefit patients. Photograph: EPA

The Government must produce more information on how businesses would manage a no-deal Brexit “on the ground” and to provide “more meaningful” support measures, business group Ibec said.

Responding to the Government’s no-deal contingency plan published on Wednesday, the country’s largest business representative group said a comprehensive range of state aid supports would be required to protect jobs and businesses that are most exposed to the risk from the UK crashing out of the EU without a deal.

Fergal O’Brien, Ibec’s director of policy and public affairs, suggested that there should be a transition period beyond the end of March 2019 when the UK is due to leave the EU even in a no-deal scenario.

“Reckless time-wasting” by the UK government was, he said, forcing businesses to activate costly no-deal contingency planning and that if the UK parliament cannot ratify the UK’s withdrawal agreement to leave the EU, it should defer or cancel Brexit.

“Adjusting to a radically new trading relationship with the UK at the end of March is not possible and not realistic. Acute trade bottlenecks would be created overnight,” said Mr O’Brien.

“Jobs and businesses would be immediately on the line. Companies are preparing insofar as they can, but the economy is simply not in a position to deal with such an unprecedented and profound shock.”

Ibec has called for a new business stabilisation fund to provide short-term finance to companies affected by Brexit, supports for companies looking for new markets beyond the UK and a measure that would allow companies claim Vat as an input credit at the same time as declaring their liability to minimise cashflow needs.

British Irish Chamber of Commerce director-general John McGrane said the Government’s contingency plan shows “the stark reality of the disruption ahead.” The chamber would work with officials and state agencies to “help deliver as many practical supports as possible for all businesses,” he said.

The Government’s contingency plan says that it intends to buy land at Dublin and Rosslare ports for new offices, public counters and parking for trucks in anticipation for increased customs checks and border inspections. There may be a requirement for up to 45 emergency legislative measures with a disorderly Brexit.

“A no-deal Brexit would be an exceptional economic event which would be met with exceptional measures to support the continued operation of the Irish economy and our international trading links,” the report said.

The contingency plan drew concerned reaction across the business sector.

The Irish Exporters Association welcomed the actions to build new border inspection and customs facilities at Dublin and Rosslare ports but warned that there were still “capacity and capability concerns” on access and capacity at both ports.

The group said that if no Brexit deal is agreed, exporters will need “strong and immediate short-term financial assistance for businesses”. It said it regretted that a large focus of the plan “lies on working primarily through State agencies”.

The Irish Pharmacy Union said the contingency plan was “long overdue” but the pharmacies needed “clear guidance and practical solutions” to benefit patients in a no-deal Brexit.

“Without comprehensive answers from the Government, pharmacists cannot reassure patients that they will not have to change their medications or get new prescriptions from their doctors,” said Darragh O’Loughlin, secretary general of the union.

The Killybegs Fisherman’s Organisation has warned that a no-deal Brexit would be “apocalyptic” for the Irish fisheries industry given its reliance on stocks in UK waters.

“There is nothing in the document other than telling us what the problem is,” said KFO chief executive Sean O’Donoghue of the contingency plan.

He welcomed the fact that the plan noted that the critical issue for the fisheries sector in Ireland and a number of other EU member states was the maintenance of reciprocal access to fisheries waters and resources.