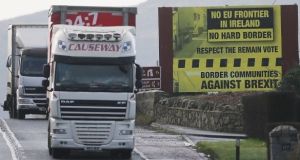 A truck passes a Brexit billboard in Jonesborough, Co. Armagh, on the northern side of the Border. Photograph: Niall Carson/PA

The head of the Northern Ireland Civil Service (NICS) has written to all staff seeking “volunteer” assistance should the North end up in a “worst-case scenario” Brexit.

As Dublin, London and Brussels prepare contingency plans should the United Kingdom crash out of the European Union Stormont is also developing arrangements to ensure Northern Ireland has the “structures and capacity in place” to address any Brexit difficulties.

David Sterling, head of the NICS, has written to all 23,000 staff asking for “volunteers” to help with putting in place special contingency plans.

“I am now asking for voluntary expressions of interest from colleagues across the system who would be willing, if needed, to join the NICS contingency response structures and fulfil key roles,” he said in his letter.

“To be clear: this does not mean that I now think a no-deal exit is now the most likely outcome, or that it will even be necessary to ever operate these arrangements,” he added.

“This is simply the next step in readying our plans for exit day. The fact is, it is not possible to predict what will happen now and the possibility of some disruption remains, even in the event of an exit governed by the terms of the withdrawal agreement,” said Mr Sterling.

He said that a no-deal Brexit would require “comprehensive plans for contingency arrangements to deal with the worst-case scenario, where there is sustained and widespread disruption”.

“Such plans would require us to establish new, temporary structures, which we may need to operate on a 24/7 basis,” said Mr Sterling.

He told civil servants they “must be ready to respond quickly and decisively, whatever the future outcome may be”. He explained that civil servants would be required to work shifts and weekends as part of the planning.

Alison Millar, the general secretary of the Northern Ireland Public Service Alliance, which represents the majority of civil servants, said the union accepted there is a need for forward planning in the event of a no deal Brexit.

“The issue for NIPSA however is that people, in our view, are not being adequately rewarded for what they may be required to do which is to be available 24/7,” she said.

“We believe there should be an additional payment made,” she added.

NIPSA has had no success with NIPSA management so far in gaining extra pay. Ms Millar said the union would continue to press for additional pay for such work.