A million trees, including 400,000 oaks, to be destroyed this week 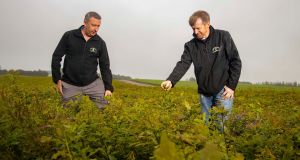 Due to a crisis in the commercial forestry business, the destruction of one million trees, including 400,000 oaks, has started this week.

Already five million trees have been shredded in the past three years by the State’s largest supplier of sapling trees.

Teige Ryan of None So Hardy forest nurseries, which has bases at Coolattin, Co Wicklow, and near Enniscorthy, Co Wexford, said the forestry industry in Ireland, after years of decline, was now in a severe crisis.

He compared the industry to “a patient with a long-term, serious illness who has just had a heart attack”.

Mr Ryan said administration of forest services and licensing by the Department of Agriculture had never been accompanied by a sense of urgency, with the result that many farmers decided against planting trees, and Government targets for planting have been repeatedly missed.

But Mr Ryan said the critical factor that has “given the business a heart attack” was a European Court of Justice case in recent years that found environmental assessments, part of the forest licensing process, were not sufficiently rigorous.

The EU case was taken by environmental campaigner Peter Sweetman against the development of a windfarm on Coillte lands in Co Laois, and the decision was handed down in March 2018.

The case triggered a review of licensing arrangements by the forest service of the Department of Agriculture, which signalled a need for many more ecologists and administrative staff to implement the proper assessments.

To achieve this target requires an annual afforestation programme of 15,000 hectares, according to the Wood Marketing Federation.

Following the European court ruling, Mr Ryan says the out-turn for this year “is likely to be about 2,500 hectares”.

He warned “urgent political action” was needed if planting this November were to go ahead in any meaningful numbers.

Standing beside 400,000 oak saplings at his land in Co Wexford, Mr Ryan said the saplings had a limited shelf life. He also claimed his business supplies “over 90 per cent of plants required to deliver the Government’s climate action afforestation targets”. The targets, he said, “remain at high risk due to current Department of Agriculture administration”.

The failure to plant in sufficient numbers in recent years had the potential to wipe out his business, had it not been for exporting to Scotland. “We don’t grow trees for export,” he said. “This is an emergency. It is that serious.”

“A new planting season begins in November and without political intervention we will face the same situation next year.”

Last November then minister of state for forestry Andrew Doyle published a review of the department’s approval process, which was carried out by James Mackinnon, who is credited with streamlining the industry in Scotland. The review made recommendations to streamline procedures in Ireland, and its implementation is part of the current programme for government.

But Mr Ryan said the industry was still awaiting “a Government statement or press release outlining a strategy for the Mackinnon report”.

The Department of Agriculture said it was “intensively engaging” on the issues and accepted that changes to assessment procedures had been “challenging to implement”.

“The scope and breadth of these changes has unfortunately meant that delays have occurred and the current backlog has arisen,” it said in a statement.

The department said it had plans for dealing with the current backlog that included additional ecologists, forestry inspectors and administrative staff.

It said there would be a continuous review of the process and stakeholders would be fully and regularly informed of progress.

“For the plan to succeed, stakeholders also need to engage with it. This will require a commitment from forestry companies to submit applications that are of the required standard and quality,” the department said,

“The current situation is challenging, but it is a temporary disruption which, when resolved, will make for a better, more sustainable and fit-for-purpose forestry licensing system for many years to come.”