Doctors fearful of criminalisation as women present at 11 weeks’ gestation 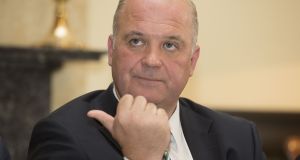 The chief medical officer, Tony Holohan, has moved to address concerns about doctors performing terminations beyond the 12-week legal limit.

Abortion up until 12 weeks’ gestation became legal at the start of the month, but concerns have been raised that women who present at 11 weeks’ gestation may take more than a week to complete the procedure.

In a letter to Dr Peter Boylan, who has been assisting the HSE in overseeing the roll-out of abortion services, Mr Holohan moved to address the concerns.

“I refer to your recent discussions on the early pregnancy provisions in the Health Regulation of Termination of Pregnancy Act 2018. The Act will commence on the 1st of January 2019. For the avoidance of doubt, it is lawful under section 12 of the Act to carry out a termination of pregnancy, which includes the prescribing of a drug, before the pregnancy has exceeded 12 weeks (and at least three days has elapsed from the date of certification).

“It is recognised that in some circumstances, the process of completion of the termination may extend beyond 12 weeks. I trust this clarifies the matter for you.”

The Master of the Rotunda, Fergal Malone, told The Irish Times at the weekend that doctors were fearful of criminalisation over the issue. He has said the Rotunda would not provide abortions for women at more than 11 weeks’ gestation for this reason.

And a letter from the Institute of Obstetricians and Gynaecologists to its members, which was sent on January 18th, has raised further concerns stating that there is still “ambiguity” on the issue.

“Regarding the 12-week cut off. It is not legal to commence a procedure after 12 weeks. Ambiguity remains despite best efforts, in cases where commencement occurs before 12 weeks but the procedure, eg medical, takes longer than expected,” Dr Cliona Murphy wrote.

Members of the institute are warned that they should have full knowledge of the new law and not just the medical guidelines.

The letter also states that “Familiarity with the guidance does not take the place of knowledge of the legislation itself. Guidance is not binding, the law is. It is important that all practising obstetricians and gynaecologists familiarise themselves with the law.”

Tourists with plans to travel to China should be able to cancel at no cost 17:19
Mother of three McGinley children appears in court charged with their murder 17:08
Girl (7) settles case over alleged brain injury at birth for €5.8m 16:55
Fianna Fáil promises to ban credit card betting if elected 16:54
Man dead in ‘superloo’ for up to 20 hours before discovery 16:39
SUBSCRIBER ONLY