A protester has been arrested after disrupting a military ceremony commemorating the British soldiers who died in the Easter Rising. Video: Ronan McGreevy 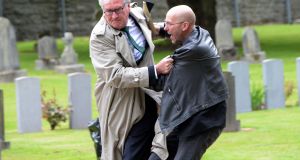 A protester is removed from the State ceremonial event marking the deaths of British Soldiers in the Easter Rising, at Grangegorman military cemetery in Dublin. Photograph: Eric Luke/The Irish Times

The Canadian ambassador to Ireland was involved in helping to arrest a man who disrupted a commemoration service on Thursday for British soldiers killed in the Easter Rising.

Kevin Vickers grabbed the man who shouted “shame” and “insult” just as the service at Grangegorman military cemetery was about to start.

Mr Vickers had become a national hero in his own country having shot dead a gunman who stormed the Canadian House of Commons and threatened a massacre in October 2014.

Michael Zehaf-Bibeau found his way into the parliament building. He was shot and killed by Mr Vickers who was then the sergeant-at-arms in the parliament.

The ceremony at Grangegorman military cemetery was held to commemorate the estimated 125 British soldiers who died in the Easter Rising. According to the author Neil Richardson, 40 per cent of them were Irish.

The event was about to start when a protester emerged from the crowd and started shouting “shame” and “insult to Ireland”.

For a moment everyone gathered watched in stunned silence, until the respectable-looking bespectacled gentleman in a trench coat and suit rose from his front row seat and grabbed the man by the lapels of his leather jacket.

The protester seemed to be as stunned as everyone else as he offered no resistence but instead started yelling about the “Craigavon Two”, two Republican prisoners who are in jail for the 2009 murder of PSNI Constable Stephen Carroll.

Mr Vickers dragged the man around the back of the grandstands erected for the events where he was arrested and handcuffed by gardaí. The ceremony continued.

Mr Vickers was not available for comment on Thursday night. A spokesman for Canada’s Global Affairs Department, its foreign service, issued a statement on Thursday evening stating that “Ambassador Vickers is safe and was not injured during the incident”.

The 59-year-old former sergeant-at-arms at the Canadian House of Commons and a 29 year police veteran was given a standing ovation by parliamentarians in Ottawa two years ago.

He found himself trending on Twitter in both Ireland and his own country ater Thursday’s incident.

Others hailed his exploits under a newly-acquired nickname: The “AmBadAssador”.

Among those in attendance were the Minister for Foreign Affairs Charlie Flanagan and the British ambassador to Ireland Dominick Chilcott. Both laid wreaths in memory of the British war dead of Easter Week.

Mr Flanagan said the service was in keeping with the Government’s stated aim to commemorate the centenary of the Rising in a spirit of reconciliation.

“We have learned in the century since the Easter Rising often through painful experience the importance of mutual respect for the different traditions and the multiple narratives across our islands,” he said.

“Days like these are an opportunity to broaden our understanding of all the different influences which have contributed to making the Ireland and Britain of today.”

The first British officer to die in the Rising, Lieutenant Gerald Neilan from Co Roscommon, was remembered at the service. His brother Arthur was with the Irish Volunteers during Easter Week 1916.

Another who was remembered was Private Neville Friday from Tipperary, the youngest British soldier to die in the Rising. He was just 17.

“We remember and recognise the grief and pain of those from across these island at the loss of a loved one,” he said. “Each of these lives matter and their memory matters today.”

The ceremony was a joint British-Irish affair with colour parties from both the Irish and British armies.

It began with the reading of A Soldier’s Grave by Francis Ledwidge, the Irish poet and British soldier who was killed at the Battle of Passchendaele in 1917. His most famous poem was A Lament for Thomas MacDonagh.

Accounts of the Rising from British soldiers were read out as was the poem by the war poet, Robert Graves entitled The Last Day of Leave.

Irish Defence Forces head chaplain Fr Séamus Madigan said the British war dead should be remembered “with the generosity of spirit of the executed leaders of 1916. They spoke with respect of all those who did their duty. Our remembrance need have no boundaries”.