Can SF under 'Djerry Adams' become the North’s largest party? 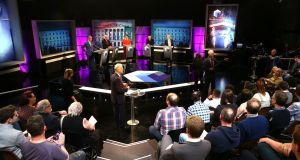 They were spoken by a woman, who said of the DUP leader and First Minister Arlene Foster: “she has a 100 per cent [support] from me”.

Right from the outset of this election campaign, DUP strategists have focused on Foster, capitalising on her warmth and natural appeal and the fact that she is not Peter Robinson.

The strategy even prompted BBC interviewer William Crawley to ask DUP Health Minister Simon Hamilton yesterday if the party had changed its name to the “Arlene Foster Party”.

As far as the DUP (or AFP for that matter) is concerned, if it has a good asset it is going to use it for maximum benefit. It’s noticeable, too, that in this election the DUP has virtually erased Robinson from the script.

In that same broadcast, as in others, Foster warned that if unionists did not rally behind the DUP, then that other big personality in Northern Ireland politics – Martin McGuinness – could end up as the next first minister.

It’s a Northern version of Project Fear: if you vote for Mike Nesbitt’s Ulster Unionists or any other unionist, you might well end up with McGuinness.

McGuinness, the Deputy First Minister hasn’t ruled out the possibility of Sinn Féin being the largest party after the votes are counted on Friday and Saturday. Equally, he isn’t talking it up.

“One or two seats might change, maybe more than that,” McGuinness told The Irish Times. “But it won’t effect the outcome because the outcome will place a huge responsibility on the DUP and Sinn Féin to take the process forward in a much more positive and constructive and responsible spirit.”

In other words, regardless of electoral changes here and there, the bottom line is that after polling day tomorrow the DUP and Sinn Féin will still be running the show.

“The DUP are trying to consolidate their own vote,” said McGuinness. “They’ve obviously made the assessment that the only way to do it is to put me up as the bogeyman. I don’t think I am a bogeyman.

Could it happen? Leicester won the Premiership, after all, so it is wise not to totally rule out the possibility. But it seems a longshot. The DUP began this campaign with 38 seats and Sinn Féin 29.

The election has never fired into a high gear. It has been a largely tame affair, apart, of course, from the inadvisable late-night Django Unchained n-word tweet from Gerry Adams (or “Djerry Adams”, as some wags are calling him), a few small controversies and some politicians getting a roasting on BBC Radio Ulster’s The Stephen Nolan Show.

There are some minor indications of change. Gerry Carroll should surely win a seat for People Before Profit in West Belfast and Eamonn McCann has a good chance of doing the same for the same party in Foyle. On the other side of the left-right spectrum, Ukip also has a chance, particularly in East Antrim.

Thereafter, it is questionable whether there will be any dramatic shifts in allegiance. With 14 seats, the SDLP is most vulnerable, under threat in constituencies such as West Belfast, Foyle, East Derry and West Tyrone, and maybe in South Belfast as well.

On a very poor showing, the SDLP could be down to nine. Equally, it could make a gain in, say, Fermanagh South Tyrone.

The difficult question here is: Has the arrival of Colum Eastwood, the SDLP’s new young Derry leader, helped to right a previously listing ship? He has made an impact for sure, but for the party it is hard to call.

There are possibilities of gains in constituencies such as South Down, North Belfast, Lagan Valley and Strangford. Again, however, the unknown is whether Project Fear will stall the momentum Nesbitt has created.

For the Alliance Party, it should be a question of consolidation with the possibility of minor gain. Jim Allister of the Traditional Unionist Party is a shoo-in in North Antrim, while there is a chance that Henry Reilly could take a seat for his TUV party in South Down, where former Ulster Unionist John McCallister is battling to hold his seat.

Based on the predictions from the 18 constituency profiles that have appeared in The Irish Times, the 108 seats would divide like this: DUP, 37 (down one); Sinn Féin, 28 (down one); UUP, 16 (no change); SDLP, 14 (no change); Alliance, 8 (no change); and one each for the TUV, Ukip, the Greens, People Before Profit and independent unionist McCallister.

Us pundits seldom get it totally right, and elections invariably throw up surprises. Still, when the last vote is counted in these Northern Assembly polls, the political landscape shouldn’t look too radically altered.