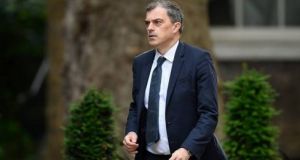 The DUP has again sounded a warning that it will not accept an agreement to restore Stormont that has Irish language legislation unacceptable to unionism.

As talks resume at an urgent pace at Stormont on Monday, DUP Assembly member Gregory Campbell said that regardless of the January 13th deadline for an agreement it would only sign up to a “good deal”.

Pádraig Ó Tiarnaigh of Conradh said he reminded Mr Smith that the 2006 St Andrews Agreement promised such legislation. He indicated that Conradh was expecting a standalone Act, which the DUP has opposed.

“This new legislation must be drafted, as the St Andrews Agreement compels, from the language legislation in Wales and in the south. Those Acts are independent from any other pieces of legislation. They facilitate rights and respect,” said Mr Ó Tiarnaigh.

“Speakers of Irish, be they speakers using the language in their home, in their schools or in the community, can no longer be treated as second class citizens.”

Mr Campbell, whose “curry my yogurt” take on the Irish language offended many nationalists and Irish speakers, said “where the Irish language has a perfectly acceptable place in Northern Ireland society and is resourced appropriately, as it already is, there will not be a problem or opposition from the DUP or wider unionism”.

However, he added: “Where there is an unacceptable and unreasonable demand to elevate it above all other minority languages, whether it is SF, other parties or HM government saying we will have to yield on this issue as it is preventing devolution returning, we will not do so.

“Let us all take this week to see what is doable, negotiate a balanced set of proposals, and get it done instead of grandstanding in the hope of gaining a one-sided victory.”

The British and Irish governments will this week try to steer the North’s five main parties to an agreement to restore the Northern Executive and Assembly before next Monday’s deadline.

Minister for Foreign Affairs Simon Coveney, who will join Northern Secretary Mr Smith at the talks during the week, has already stated that the two governments will publish a document this week outlining their best read of what would constitute a “fair and balanced deal” to reinstate the powersharing institutions.

And while some outstanding issues remain to be fully resolved, Dublin and London are banking on the pressures on the parties, particularly on the DUP and Sinn Féin, being sufficient to finally push them over the line to a deal.

Mr Coveney and Mr Smith are hoping the logic of the line expressed by senior DUP negotiator Sir Jeffrey Donaldson last week that “all roads lead back to Stormont” will be turned into reality this week.

“The presumption that everyone has to do this deal remains the presumption,” said a senior talks source on Sunday.

Mr Smith has stated that if there is no deal by next Monday (January 13th) he will call Assembly elections.

The DUP and Sinn Féin, after quite poor performances in the December Westminster election in which the centre-ground SDLP and Alliance did well, would not welcome Assembly elections now.

And in the face of another nurses’ strike on Wednesday, the general crisis in the North’s health service, and the heavy demands on other public service, the parties have been under considerable public pressure to get the deal done.

“The willingness of the public to continue to tolerate parties arguing over what most people see as relatively small issues can only be stretched so far,” said the talks source.