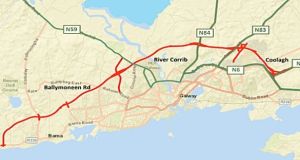 A plan for a €600 million ring road around Galway city is to be considered by the Cabinet today.

The proposed route involves a new bridge and viaduct over the river Corrib, two short tunnels on the city’s east side, demolition of 44 houses and acquisition of 10 more houses which would be seriously affected.

In return, the planners promise a seamless 18km (11-mile) link between the east and west of the city. This would start out as a 6km-long single carriageway west of Barna and continue via Ballymoneen Road in Knocknacarra to Letteragh, where it would become a dual carriageway.

The 12km dual carriageway section runs through Dangan sports facilities at NUI Galway (NUIG). It crosses the river 200m south of Menlo Castle, with the first of two tunnels about 230m in length under the candidate Lough Corrib special area of conservation at Lackagh quarry (Coolagh) on the Headford road.

The second tunnel is planned to the north of Galway racecourse at Ballybrit. And the route then links up with the M6 terminus at Coolagh roundabout – one of two townlands named Coolagh on the plan.

The 44 houses facing demolition, many of them relatively new, extend from higher valued properties to the west of the river Corrib at Furrymelia near Barna, Letteragh and Bushypark to more densely-populated urban areas on the east side of the river near the Headford road and Castlegar.

Minister for Transport Shane Ross will ask the Cabinet to approve the business case for the project. It is expected that after the Cabinet meeting, subject to approval by Ministers, Galway County Council will submit the proposed scheme to An Bord Pleanála.

In a memo to Cabinet, Mr Ross outlines the positive and negative impacts of the plan. The ring road will improve connectivity to the national roads network while also “reducing congestion in the city by segregating cross-city traffic from urban traffic”, the memo states.

The negative impacts include destruction and demolition of homes.

Once the Cabinet approves the planning application, it is also committing to a budget for acquiring lands and property – involving dispatch of up to 1,000 letters giving notice of possible compulsory purchase orders. An oral hearing is anticipated in the Spring.

Minister of State at two Government departments Séan Kyne is behind the project, along with three of his four Galway West colleagues, as are business interests including Galway Chamber of Commerce.

“A lot of preparatory work has been undertaken by Arup engineers, Galway city and county councils. And it is vital for the future of the city,” said Mr Kyne.

However, Independent TD Catherine Connolly believes “groupthink”, which has prevailed since abandonment of the previous Galway “outer bypass”, is blinding planners to other solutions. And this at a time when climate change initiatives should be influencing a move away from cars.

“Can we justify spending just over €30 million per kilometre on yet another road?”she asked.

She supports the “Gluas” light rail campaign for Galway, which is not opposed to the ring road but believes there is scope for both.

Opening up the hinterland

Public transport is a key element of what is billed as an integrated Galway transport strategy. Its objective is shifting up to 60 per cent of transport in Galway away from the car towards walking, cycling and a “BusConnects” plan.

NUIG geographer Prof Ulf Strohmayer, also a supporter of Gluas, believes if the public transport element is implemented in full, it could have a positive impact.

An enlightened public transport strategy could also link the suburbs of Barna, Moycullen, Oranmore and Claregalway in the county area, which account for a large percentage of commuter traffic, he says.

The new ring road, by contrast, will open up areas to the west and northeast for further development, said Prof Strohmayer. This risks breaching the National Development Plan stipulation that 50 per cent of any such new development for a larger Galway population must be within the existing city footprint.