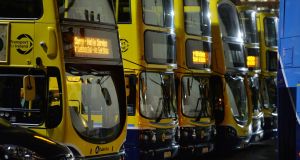 The NTA is due to publish a final Bus Connects network design in the first quarter of 2019. Photograph: Alan Betson

BusConnects is a short-term measure aimed at “sweating the existing transport network for as long as possible”, the Dublin Chamber of Commerce has said.

In a submission to the National Transport Authority (NTA) about the redesign of the capital’s bus network, the group said a “much more ambitious investment” is required in Dublin’s transport infrastructure in the medium to long term.

“The lack of a modern, reliable public transport system is already acting as a barrier to the city’s ability to take up the investment and jobs opportunities that are coming its way,” the submission said.

“While we welcome the aims of BusConnects in providing a more efficient bus service, the reality is that projects such as MetroLink and Dart Underground must be progressed without delay.”

More than 20,000 submissions had been received by the NTA in relation to the redesign of the network when the period of public consultation closed on Friday.

Dublin Chamber, which represents 1,300 companies, said it believes the current bus network in Dublin is “no longer fit for purpose” and supports the decision to consider revising the network.

It said the continued prosperity of Dublin is dependent on an improvement in the city’s public transport network.

“There is an urgent need for better integration of the various public transport modes in Dublin. Currently, there is an inadequate level of synchronisation across the various modes,” it added.

Dublin Chamber said it supported the idea of creating spines along the main arterial roads in Dublin along with orbital routes outside the city centre. It also said it would like to see the use of cash on public transport phased out over the coming years.

However, the group said it was disappointed by “the lack of attention” given in the BusConnects plan to improve the current public transport deficit around the M50.

“There is very little proposed in the BusConnects plan that will help address the high level of congestion that we currently see on the M50. We would like to see this addressed in the next iteration of the plan,” it said.

Under the plans, current bus numbers would be replaced by a new lettering system from A to G, indicating seven main routes through the city with buses running every four to eight minutes on these “core corridors”.

Radial bus routes would be supplemented by frequent orbital services, enabling passengers to switch from one bus to another at no extra charge. The plan acknowledges some bus users who currently have a direct route into the city centre from where they live would have to change buses to reach their destination but say journey times will be significantly shorter.

The NTA is due to publish a final network design in the first quarter of 2019.