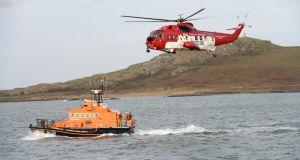 The Cabinet has approved a reorganisation of maritime safety and marine emergency services by Minister for Transport Leo Varadkar which will combine the Irish Coast Guard (ICG) and Marine Survey Office (MSO).

The plan involves establishing a new body, the Irish Maritime Administration (IMA), which will direct the ICG and MSO.

The ICG is primarily responsible for emergency response to incidents on water, while the MSO monitors safety standards on boats and in ports.

However, the overhaul to allow for more civil servants involved in policy will have staff implications on the technical side, according to sources.

The ICG’s radio station staff will be reduced from three-man to two-man watches, as 46 watch officer positions have fallen to 39. Retired staff may have to be hired on an ad-hoc basis, if budgets permit.

A spokesman for Mr Varadkar denied there would be staff shortages and said a departmental review had identified the need for 40 radio officers. There were currently 38 posts at three radio centres and recruitment was being undertaken to fill two remaining vacancies.

The reorganisation was undertaken on foot of two value-for-money consultancy studies of the ICG and MSO published last year.

The studies, by Fisher Consultants, recommended a dedicated ICG team to deal with pollution response, and improved support for the 1,000 ICG volunteers in 50 coastal-based rescue units.

The studies highlighted a backlog in enacting maritime transport legislation to fulfil national, EU and international obligations on maritime safety, pollution prevention and control, and identified “significant gaps” in information technology systems in both organisations.

Mr Varadkar said the overhaul will have an “overriding emphasis on safety and will co-ordinate efforts more closely between the Irish Coast Guard and MSO”, which are subdivisions within his department.

The Minister is committed to retaining all three ICG co-ordination/radio stations at Valentia, Co Kerry, Malin, Co Donegal and Dublin, but says the new IMA will aim to integrate operations between the three.

As part of this, a “technology enhancement programme” will be initiated to provide “efficiencies and achieve savings”.

The IMA has been charged with drafting a new maritime safety strategy which Mr Varadkar flagged earlier this month in Union Hall, Co Cork.

It has also been charged with improving the State’s preparation for major oil pollution incidents, and “enhancing” volunteer training within the ICG.

“The last few weeks have reminded us in the most tragic terms that water is an important but potentially lethal environment,” Mr Varadkar said.

A consultation period is due to be initiated shortly for the maritime safety strategy, which will apply to recreational activities, commercial fishing, merchant shipping and passenger ferry movements. Mr Varadkar said his key concern is to “create a culture of safety at sea”.

In Union Hall earlier this month Mr Varadkar agreed to “consider” a request from Caitlín Uí Aodha, widow of Michael Hayes, skipper of the Tit Bonhomme to review the initial response to the vessel’s sinking in January 2012 in Glandore.

Separately, the Department of Communications has been reviewing the handling of 999 emergency telephone response at the time.

Minister of State for Tourism Mr Michael Ring is due to mark deployment of a second Sikorsky S-92 helicopter at the ICG’s Sligo search and rescue base today.

The Sligo S-92 has already completed 29 missions since June 30th, when it arrived at the base, including the delivery of a baby boy in Letterkenny General Hospital after an air ambulance evacuation from Arranmore island last week.