Over 1,000 submissions received on scheme designed to protect more than 2,000 properties 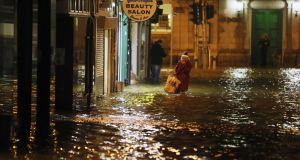 A woman makes her way through flood waters in Cork city on February 4th, 2014. Flooding had hit a large part of the country for a second day. File photograph: Niall Carson/PA Wire 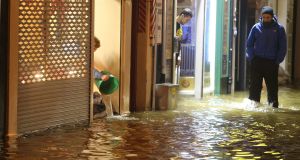 A woman bails out water from a shop as flood waters rise in Cork city on February 4th, 2014. File photograph: Niall Carson/PA Wire

Business leaders in Cork have welcomed the OPW’s publication of its report on public consultation on a €140 million flood relief scheme for the city designed to protect over 2,000 properties from flooding.

Both Cork Chamber and Cork Business Association said they believed the development of an appropriate flood defence scheme as proposed by the OPW in the Lower Lee Flood Relief Scheme was “critical for business in Cork”.

Chamber president Bill O’Connell said the proposed scheme provides comprehensive protection from tidal and fluvial flooding through a raft of measures, from upstream bunds to the restoration of 3km of walls in the city centre.

He said the chamber had been consistent in its support for the scheme, provided it was finished to a high standard and respectful of Cork’s urban heritage. He noted the scheme involved innovative measures at locations such as the North Mall and Sullivan’s Quay.

“We highlighted the need for improved design during consultation and the inclusion of full retractable demountable barriers at these locations shows the lengths being taken to listen to stakeholders. We welcome the improved design published by the OPW,” he said.

The Save Cork City campaign group has been highly critical of the plan which they say will restrict access to both channels of the River Lee as it flows through Cork city. Instead they have advocated the construction of a tidal barrier downstream of the city as a more appropriate solution.

However, Cork Business Association president Pat O’Connell said the OPW report on the scheme showed that even if a tidal barrier were viable from planning, environmental, navigation and cost perspectives, protective measures would still have to be taken in the city centre.

“The OPW report shows the current scheme is a necessary first step for fluvial flooding and to reduce the dependency on any potential future barrier closures. At a minimum, the provision of city centre flood defence is a critical component of any long-term additional solution.”

Both men were commenting after Minister of State at the OPW Kevin “Boxer” Moran hailed the publication of the 36-page report by the OPW as important progress after more than 1,100 members of the public made submissions on the plan.

“The Cork City Flood Relief Scheme, when it is constructed, will be the largest-ever flood relief scheme undertaken in Ireland and will provide protection to 2,100 properties, including 900 homes and 1,200 businesses, extending from Inniscarra Dam to the city centre,” Mr Moran said.

“It is designed to best international standards to provide protection against the one-in-100-year fluvial and one-in-200-year tidal flood events,” he said, adding that it was a significant piece of infrastructural investment not just for Cork but for the country as a whole.

Mr Moran said the OPW has a proven track record in the delivery of effective flood relief schemes, and the Cork scheme, prepared with consulting engineers Arup, has been designed so that “it is adaptable to provide greater protection in the future in response to climate change”.

“The Cork scheme takes account of architectural, environmental and heritage considerations raised during the public consultation process and provides a technically feasible and integrated flood defence solution for the city in line with best international standards,” he said.

“There is a long history of flooding in Cork city, most recently in November 2009, February 2014 and in winter 2015/16, with significant damage estimated at over €130 million to commercial and residential property in Cork – so it’s essential this scheme is implemented without delay.”