Buncrana pier deaths: ‘The man was still shouting to me when the car went down’ 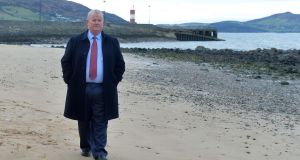 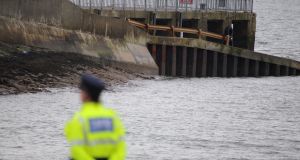 A garda looks at the slipway at the centre of the Buncrana tragedy. Photograph: Joe Boland/North West Newspix

Local man Francis Crawford has described the harrowing scene as a car carrying six people sank into the sea off Buncrana pier.

Five people drowned in the incident, while a two-month-old baby girl was rescued.

Those who died were a woman (57), from the Shantallow area of Derry; her 15-year-old daughter; the 46-year-old partner of another daughter, who is originally from the Creggan area; and his two sons, aged eight and 12. The mother of the children had been on a “hen weekend” in England at the time of the tragedy.

The baby was taken to nearby Letterkenny Hospital where she is currently in a stable condition.

Mr Crawford said he was walking on the pier in the Co Donegal town on Sunday evening when noticed the Audi SUV in difficulty on the slip.

He said he ran over and spoke to the driver who shouted at him to call the coast guard. He did so and was told emergency services were on the way. At this stage the car was “bobbling’ in the water. He noticed the baby in the water.

“A man came along then, I asked him could he swim, he said he could, he stripped down to his underwear and he swam out to the car.

Mr Crawford said the man who swam out to the car was a hero and risked his own life. He stripped down to his underwear and swam to thevehicle as it drifted off the slipway. “How he got (the baby) ... they are saying it was handed out to him,” Mr Crawford said. “When he came back he was totally exhausted. I think if he had another five yards to go - I can’t see how he would have made it.”

Mr Crawford described the panic that ensued with the car sinking within 10 minutes of it sliding down the slipway.

“All the time the car was bobbling about and I knew the services were all on their way and I was hoping against hope that the car would stay up until the people came,” he said. “I was watching the car and the nose of it started to dip and then all of a sudden the whole of it started to go down, nose first, and everything stopped,” he said.

“They couldn’t just jump out of the car and leave the children.”

He said rescuers brought a body in and did CPR, “but it was too late”.

Mr Crawford said it was heart-rending and harrowing to witness the scenes. “The man was still shouting to me when the car went down. It was very sad,” he said. “There was nothing I could do or nothing anybody could do.

“Any of the people who could do something were coming as quick as they could and got here in great time and knew what to do.

“But it was all too late. There was nothing anybody could do. Everybody did what they could and it was too late.”

Mr Crawford broke down in tears recalling the final moments. “It was harrowing and heart-rending,” he said.

“Feeling hopeless and helpless. Nothing you could do and the man (driver) was shouting to me and I said ‘I’ve phoned them, everyone is on their way’ and he was still shouting.

“You felt so hopeless and you watched it unfolding in front of your eyes. It was a surreal sort of thing.”

The car appeared to sink “in a matter of seconds”, one of the rescuers said.

Joe Joyce of the RNLI said due to a local exercise there were two lifeboats and a tender in the area at the time of the tragedy but that such was the speed at which the car sank rescuers could not get to the occupants in time to save them.

“The three boats went out and each brought back a body,” said Mr Joyce at Buncrana pier today.

Mr Joyce, a shopkeeper and volunteer with the RNLI, explained that others of the rescue crews managed to get to the car and recover the bodies of two young boys who were found trapped in the back of the car.

He praised the man “who stripped down and and at great risk to his own life went into the water and rescued the baby”.

He said three of the occupants appeared to have got out of the car. “It’s suspected that they couldn’t open the windows because the electrics may have shorted out. But the window at the passenger side had been shattered,” he said.

He believed they may have got out through the window.

“The car was about 60 metres out when the weight of its engine brought it under. It all happened very quickly. It seemed to just take seconds for the car to sink,” he said.

“We are talking here seconds, we are not talking minutes,” said Mr Joyce.

Mr Joyce said that regardless of whether they could swim that they had little chance.

“The coldness of the water and the weight of their clothes made it very difficult for them,” he added.

Mr Joyce said frantic efforts were made to resuscitate the victims but they could not be revived.

He said that the slipway was very dangerous and that once the car started slipping on the algae the weight of the engine pulled the car into the water.

Fr John Walsh, a local curate, said he received a call at 7.50pm from gardaí.

“They said one fatality. From experience, they do that, they don’t say multiple fatalities as they don’t want to panic you.

Fr Walsh said he got to the pier and found the road blocked off. He said a garda waved him through.

“There were umpteen emergency vehicles and a helicopter. They told me four bodies on the pier, I anointed them.

“The lifeboat arrived then with another body. A lady doctor pronounced them dead so I anointed them too.

“It was heart rending. There is a feeling of complete pity for the people who lost their lives, for their relatives and friends and all the people affected by this.

“The age of three of them makes it so difficult. You can cope more easily with the deaths of adults than teenagers or children.

“I have huge sympathy for the witnesses too. The highest of praise for the emergency services for their dignity and kindness.”

Local Sinn Féin councillor Jack Murray said the slip way was covered in slippery algae and something should be done.