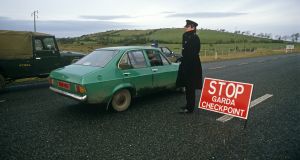 A Garda checkpoint in Co Donegal at the Border with Northern Ireland in November 1985. Photograph: Alain Le Garsmeur/Getty Images

An almost 90-minute incursion over the Border by a British RAF pilot, who flew as far south as Mullingar, prompted a diplomatic incident and major embarrassment on the part of the British authorities.

The pilot, who had just arrived in Northern Ireland a week before, spent almost an hour and a half patrolling the skies over Meath and Louth in a British Beaver aircraft, of the kind used by the army for photo-reconnaissance missions during the Troubles.

At one point during the early morning flight on December 30th, 1987, the aircraft came within just 23 miles of Dublin airport.

A cable from Irish officials in Belfast to Dublin the following day said the British admitted the incursion and were “greatly embarrassed by it”.

The pilot had been tasked to do a particular job for surveillance purposes.

“He asked his commanding officer whether he was ‘cleared for the border’. According to the British, the superior officer replied in the affirmative to this question, intending to convey that the aircraft was cleared to fly within 2km of the Border,” the note to Dublin said.

“The British side say that the pilot in question thought that border clearance meant that he could fly over the Border. I was told that the man in question ‘honestly thought he had permission to fly anywhere in the Republic’.”

He had now been “firmly disabused of this notion”, the note added.

“It is, in fact, admitted that he flew as far as Mullingar where he turned back, arriving at Aldergrove at about 8am. The British say that an incursion of 40 miles was involved.”

The Belfast officials said the embarrassment to the British was such that the most senior commanding officer had taken a direct role in establishing what had happened.

They told the British they would “convey their regret and embarrassment to my authorities” and said they had already questioned the nature of briefings, if any, given to such pilots “before they come to this part of the world”.

“In general terms I expressed incredulity that any British army pilot could possibly think he was free to fly at will in our airspace.”

The British side repeated their embarrassment at the whole affair and said the pilot had been spoken to “in very strong terms”.

A note in National Archives files from Department of Foreign Affairs secretary general Noel Dorr to senior government officials on January 21st said he had called in the British chargé d’affaires over the matter.

Other cross-Border incursions revealed in the archives include one by a marine boat attached to the gun boat in Carlingford Lough, which did a circle around Greenore Port on July 15th with someone on board waving a Union Jack.

Another in the same month was reported by a woman in Hackballscross, Co Louth, who telephoned local gardaí to say there was a British helicopter in the field behind her house.