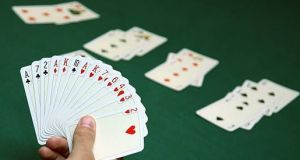 The Northern Ireland Bridge Union’s pairs competitions for intermediate A, intermediate B and novice grades to commemorate the late Ciara Burns, Ireland and Northern Ireland international player, will be held on the Bridge Base online web site next Sunday, August 2nd, starting at 2pm. Details from Sandie Millership, jsmillership@btinternet.com.

Outstanding NIBU league and knock-out matches from the 2019-20 season are postponed until normal bridge games resume. The union’s annual general meeting will be held on Sunday, August 23rd.

The Irish Bridge Union’s and the Contract Bridge Association of Ireland’s simultaneous pairs competitions have been scheduled for their usual dates in November and February respectively.

Under the NIBU ranking system 600 points is the grand-master threshold. Three of its players, Rex Anderson, David Greenwood and Ian Lindsay, have attained premier, grand-master status.

Word Bridge Federation president,Gianarrigo Rona has issued a statement that whereas online privately-organised competitions do not come under WBF jurisdiction, nonetheless it affirms its revulsion, rejection and condemnation of online cheating. The statement comes on foot of recent admission of cheating during online tournaments by a Polish international player.

Bridge Notes, on holiday during August, will resume on September 1st.