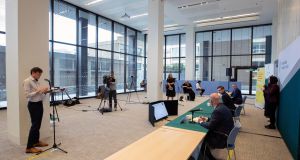 HSE internal auditors have warned that greater controls need to be put in place in the appointment of management posts in the health service to avoid “grade drift” and breaches of Government pay policy.

A new internal audit report issued on Monday said the office of the HSE director general had received anonymous correspondence, ostensibly from staff, which raised concerns about potential grade drift, non-compliance with rules on pay and the use of special purpose contracts in posts to get around official employment controls in “posts associated with hospital groups, community health organisations and (in HSE) Corporate."

Auditors said the underlying theme of the anonymous correspondence related to grade drift arising primarily from the lack of clear job sizing/role (grade) definitions which set out key characteristics and responsibilities for positions.

“Establishing such job sizing/role (grade) definitions would mitigate grade drift which is a key concern for the health sector.”

The report says the anonymous letter maintained that the post of general manager in one particular hospital had been advertised at the grade of assistant national director.

Auditors subsequently found that the previous incumbent in this role had been paid as an assistant national director but that the individual concerned had had additional responsibilities in a wider network of hospitals and that the higher salary had been “red circled” - to be applied only to this particular person and not their replacement.

Auditors said there were potential systemic issues arising from cases such as the one raised in the anonymous letter.

Auditors said that due to the passage of time and loss of corporate memory, “a red circled post may be perceived to be the substantive grade for the post, leading in effect to unapproved upgraded posts, grade drift and increased pay costs.

“Secondly, the non-adherence to, and non-monitoring of red-circled arrangements results in potential for breach of Government pay policy in relation to future appointments to particular roles.”

A second instance highlighted by the anonymous author, a new board secretary role was being established in a hospital group at a grade VIII (management) level.

HSE internal auditors said: “With the future establishment of hospital groups and community healthcare organisations on a statutory basis, this issue has the potential to set a precedent for this and many similar type roles in hospital groups and community healthcare organisations, resulting in the significant growth in the staff numbers and potential for grade drift.”

The anonymous letter also pointed to the manager of a particular hospital being paid more than the appropriate payscale for that particular type of facility.

The anonymous letter also maintained that special purpose contracts, which were supposed to be used to fill posts on a temporary basis or pending the holding of a recruitment competition, were actually being used in some cases to advertise posts of up to two years’ duration. The letter said this practice implied that permanent recruitment had not been approved and the special purpose contracts were being used to “slip posts in the system at inflated grades” and without a proper approval or appointment process.

Auditors said the issue highlighted the potential for special purpose contracts to be used to circumvent official employment controls.