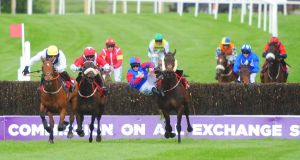 Punchestown Festival on Friday where two industry representatives met the agriculture counsellor at the Irish permanent representation to the EU in Brussels. Photograph: PA Wire

Politicians should not allow Brexit negotiations slip to the October 31st deadline to agree a EU-UK divorce deal, representatives of the Irish and British horseracing industries have warned.

The industry is concerned that if the withdrawal agreement is not signed off until the latest deadline in the deadlocked process around the UK’s departure from the EU, then the consequences of a much-reduced transition period will jeopardise free movement of horses between the UK and Ireland post-Brexit.

Speaking at the Punchestown racing festival this week, Brian Kavanagh, chief executive of Horse Racing Ireland, and Will Lambe, executive director of the British Horseracing Authority, urged British politicians to agree on a EU-UK divorce deal quickly to maximise the transition period to secure a trade deal.

A tripartite agreement, currently in operation under EU law, permits the movement of and trade in horses between Ireland, Britain and France without veterinary inspections or health certificates.

“The deal that is on the table is not a deal but is the terms of exit. Of course we want to know what does the trade deal look like, what role does the horse sector have within that,” Mr Lambe said. “The agricultural element of that deal will be the hardest. The sooner we can move on to those discussions the better.”

Mr Kavanagh said he hoped politicians would agree a deal as soon as possible because if it was left until September or October, that would leave just 14 or 15 months of a transition period, under the agreement, which was “not a long time in terms of getting EU law ready”.

While attending the Punchestown festival, the two industry representatives met Breffni Carpenter, the agriculture counsellor at the Irish permanent representation to the EU in Brussels.

Concerns about the movement of horses post-Brexit receded last month when the UK was granted “third country” status by the EU for the export of live animals, though this would not fully remove barriers to the seamless movement of racehorses and breeding stock if there was no deal agreed.

“For example, horses that are coming here from Northern Ireland in a post-Brexit situation should be isolated from the other horses, according to the letter of the law,” he said.

“What happens then? Do they race on the right hand side of the track as opposed to the left? We want to get into that sort of discussion rather than the endless arguing over the divorce.”