Boy rescued from rocks at Dalkey, Co Dublin by coastguard 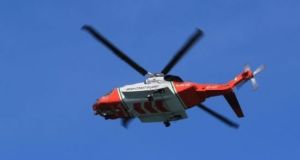 The Rescue 116 helicopter was dispatched from Dublin Airport and was on the scene at 5.15pm. Photograph: Nick Bradshaw

A 12-year-old boy has been rescued from rocks near the Forty Foot in Dublin by the coastguard helicopter.

The child got into difficulty when he fell on rocks at Bullock Harbour in Dalkey.

The Irish Coastguard got a call from ambulance control just before 4.50pm saying paramedics needed assistance.

The Dún Laoghaire lifeboat went to investigate and found the site near where the child fell was inaccessible.

The Rescue 116 helicopter was dispatched from Dublin Airport and was on the scene at 5.15pm.

The child was safely evacuated. He has been taken to hospital with a suspected ankle injury.