Juvenile charged with seven offences including theft and dangerous driving 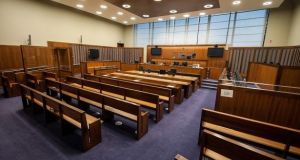 The 17 year old was brought before Cork District Court and charged with seven offences relating to the joyriding on Cork’s north side. File photograph: Collins Courts

A teenager has appeared in court after joyriding in Cork, crashing into two vans and an elderly female motorist, who was injured in the process.

The 17 year old, who can not be named because he is a juvenile, was brought before Cork District Court on Wednesday and charged with seven offences relating to the joyriding on Cork’s north side on Tuesday morning.

Garda Eric Stafford of Watercourse Road Garda Station gave evidence of arrest, charge and caution and told how he charged the juvenile with the seven offences at various locations in Cork on January 14th.

The juvenile was charged with stealing €150; the unlawful taking of a car; and criminal damage to a car, all at Popes Quay Court on Shandon Street; and with two counts of dangerous driving at Blackpool Retail Park.

Sgt John Kelleher said that gardaí were objecting to bail and seeking a remand in detention but defence solicitor, Eddie Burke said that his client would not be seeking bail on the charges at this point.

He suggested his client be remanded in detention to Oberstown Children’s Detention Campus in Co Dublin to appear again at the juvenile sitting of Cork District Court at the Washington Street Courthouse on Friday.

Garda Stafford confirmed there was a space currently available at Oberstown and Judge Mary Cashin remanded the juvenile in detention at Oberstown to appear again at the juvenile sitting of Cork District Court on January 17th.

Mr Burke said there was a background to his client’s behaviour, which resulted in the charges but he pointed out his client had never been in detention before so Oberstown would be a new experience for him.

Mr Burke said that, as a consequence, he was requesting his client receive whatever medical assistance he might require in Oberstown and Judge Cashin agreed and made an order to that effect when remanding him in detention.