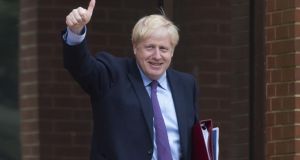 Earlier, speaking ahead of his first visit to Northern Ireland as British prime minister, he asserted he would do “everything in my power” to help restore the Northern Executive and Assembly.

Mr Johnson is due to hold a series of meeting with the leaders of the North’s five main parties at Stormont on Wednesday as those parties continue with their efforts to reinstate the power-sharing institutions.

The Stormont engagement is happening at a time when London and Dublin believe there is now an opportunity to make substantial progress if the DUP and Sinn Féin are willing to take some political risks.

On Friday, Tánaiste Simon Coveney said at Stormont that the parties were “very close to having the basis for agreement but ultimately the parties have to buy into that”.

Sources said there was particular pressure on the DUP to strategically decide, with a new Tory prime minister in place dependent on its support, whether this was the time to reach a deal with Sinn Féin, or was it better to wait until the outcome of Mr Johnson’s Brexit plan.

DUP and Sinn Féin sources while, acknowledging there was some rationale to Mr Coveney’s optimism, insisted that no deal had been agreed and considerable difficulties remained to be resolved.

Mr Johnson is being joined in the Stormont negotiations by the new Northern secretary, Julian Smith. “The people of Northern Ireland have now been without an Executive and Assembly for two years and six months – put simply, this is much, much too long,” Mr Johnson said ahead of the meetings.

“Northern Ireland’s citizens need and deserve the Executive to get up and running again as soon as possible, so that locally-accountable politicians can take decisions on the issues that really matter to local people,” he added.

“I’m pleased to meet each of Northern Ireland’s party leaders today to stress that I am going to do everything in my power to make the ongoing talks to restore devolution a success,” said Mr Johnson.

Downing Street said on Tuesday that Mr Johnson also spoke to Taoiseach Leo Varadkar “about how the UK government will continue to work with the Irish Government to deliver a successful outcome to Executive talks”.

Mr Smith said the visit of Mr Johnson during his first full week in office shows “just how important Northern Ireland is to this government”.

“It is of critical importance that new momentum is now introduced to the ongoing talks process, and that all of the parties work collectively to reach agreement,” he said.

The most difficult issue facing the negotiators, according to sources, is of dealing with identity, culture and nationalist demands for an Irish language Act.

Sinn Féin president Mary Lou McDonald said issues “can and must be resolved”.

“The negotiators have met; the various party’s positions are well rehearsed, now is the time for resolution,” she said in a speech in Belfast.

Ms McDonald said in its talks with Mr Johnson, Sinn Féin would tell him that “if the British government have factored into their calculations a hard border, then they must factor in a unity referendum as laid out in the Good Friday Agreement”.

“Brexit has re-exposed the folly of partition and reinforced the need for Irish unity,” added Ms McDonald.

DUP MP for East Derry Gregory Campbell said that “rather than trying to tell unionists they would be accommodated in a united Ireland, Sinn Féin would be better to prove their commitment to a shared future by showing respect to unionists in Northern Ireland today”.

“Sinn Féin continues to chase fantasies of a ‘new Ireland’ but fail to afford unionists and the British identity any respect. They don’t even pay lip service to it,” he said.