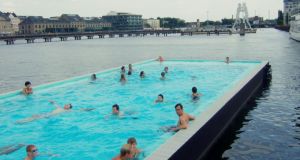 A €2.75 million urban beach proposed for Dún Laoghaire harbour has been approved by An Bord Pleanála.

The beach, modelled on Berlin’s Badeschiff project, envisages a cafe and artificial beach at the East Pier, alongside a floating river barge containing a swimming pool with heated, treated seawater.

It is a separate development from plans for the former Dún Laoghaire baths. Public consultation on the baths site on the seafront adjacent to the harbour is continuing.

The total costs of the urban beach project are to be divided between Dún Laoghaire-Rathdown County Council and Dún Laoghaire Harbour Company, which is responsible for harbour development.

However, opposition has been voiced by a number of mainly left-leaning councillors, who objected to charges being imposed for use of the facility.

She said the council had previously made it clear the beach was a replacement for the baths project and she also said there was a difficulty in getting the council to fund small things “such as a path through a field” out of its capital budget.

However, commenting on An Bord Pleanála’s decision, Cllr Cormac Devlin said it was not a question of developing either the baths or the urban beach.

He said €2.75 million had already been allocated to renovate the baths site while the conditions laid down by An Bord Pleanála would ensure the beach proposal was less intrusive than initially envisaged.

“The challenge now must be to ensure the project is both inclusive and sustainable, while also not unduly impacting on the general recreational amenity of the harbour” he said.

Dún Laoghaire Harbour Company said the project would attract more than 150,000 visitors a year and generate €1 million in admission charges.

It is expected to be open for the 2016 summer season and will be open for six months of the year, from April to September.

It is proposed that the 250sq m swimming pool on the floating barge will heat seawater to 26 degrees. The beach area is to be about 240sq m in area.