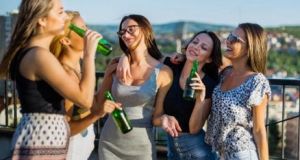 Research from Loyola Marymount University says women between 18 and 20 who binge drink run the risk of damaging their bones. Photograph: Getty stock

Teenage girls who regularly binge drink have weaker bones and are heightening the risk that they will suffer osteoporosis later in life, according to new research today.

Frequent binge drinking is classed as having four or more alcoholic drinks within two hours more than 1.6 times a month, according to the study published in the Journal of Studies on Alcohol and Drugs in the United States.

Eighty seven college students, who regularly binge drink, were found to have lower spinal bone density than more sober students, even when researchers accounted for other risks such as exercise, nutrition and smoking habits.

The findings suggest poorer bone health can be added to the list of binge drinking risks for young women, said lead researcher Joseph LaBrie, PhD, a professor of psychology at Loyola Marymount University, in Los Angeles.

“This study identifies a potential lifetime consequence of binge drinking in young women,” he said about the research, which investigated the health of the women aged between 18 to 20.

Bone mass should still be accruing in young women during these years. Women generally reach peak spinal bone density between 20 and 25.

Urging parents to discourage their children from drinking during teenage years, Mr LaBrie said: “We always talk about things like exercise, calcium and vitamin D, and not smoking. We may also need to talk about avoiding binge drinking.”