Bikers volunteer to collect donations of protective equipment for medics 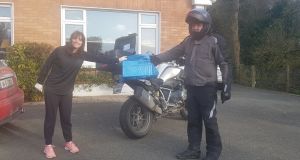 About 500 motorcyclists have volunteered to collect donations of personal protective equipment (PPE) from businesses in their locality and deliver them to St James’s Hospital for healthcare workers.

Since last Thursday, motorcyclists have travelled across the country to collect up to 70 donations of gloves and masks for the Dublin hospital.

Mervyn Colton, from the Irish Photo Rally motorcycling group, decided to organise the initiative after watching a video appeal from a doctor at the hospital on social media.

“Our logic is that so many businesses have shut, creches, dentists, beauticians, hairdressers, tattoo parlours, all of those may have a couple of packets of medical grade gloves and or masks sitting on the shelf,” Mr Colton said.

“What we’re asking is if all of those would donate them, get in touch and we’ll dispatch a rider to go and collect it.

“If they’ve got something more than a shopping bag’s worth, our riders also have vans, cars and jeeps . . . The current appeal is for St James’s Hospital but other places have been getting in touch, we’re going to try to bring it to wherever there is the greatest need.”

Mr Colton said he has been inundated with motorcyclists volunteering their services with collections stretching as far as Co Cork, Co Wicklow, Co Meath and Co Offaly.

“A lot of our members are out of work, they’ve nothing else to do. Some of them have actually come up and said I can afford to do two runs a week and that’s all the money I’ve got for petrol but I’ll do it,’ he said. “There’s massive goodwill.”

Mr Colton said they immediately stopped deliveries on Friday night after further restrictions were announced by the Taoiseach Leo Varadkar. However, collections and deliveries subsequently continued on Saturday following advice from the Garda and the HSE.

“The way I’m looking at it, the health service is a bit like the front line in a war and if all the rest of us, if we can’t be on the front line, the least we can do is keep resupplying the front line whether it’s PPE, meals, whatever it might be,” Mr Colton added. “I think we all need to pitch in.”

They are still seeking donations and have asked people to email ppedonationsire@gmail.com.