Berkeley victims will be a beacon for J1 students, says priest

‘They will loom large in all our lives,’ Fr McBride says at US month’s mind mass 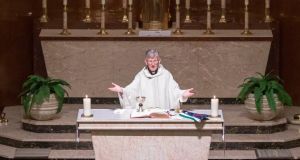 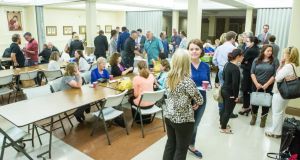 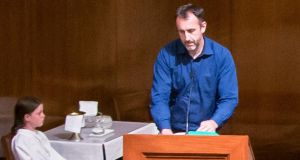 Philip Grant, Consul General Of Ireland for the Western US, delivers a reading at the Month’s Mind Commemoration Mass for the Berkeley tragedy victims. Photograph: Martin Lacey.

Six students killed in last month’s balcony collapse in Berkeley will be “a beacon” for all Irish students who follow them to California on summer visas in future, a priest has said at their month’s mind mass in San Francisco last night.

In his homily at the service, Fr Brendan McBride of the Irish Immigration Pastoral Centre in San Francisco said that following the June 16th tragedy everyone would look differently at J1 students, whom he described as “bright young people who are going to be the leaders of tomorrow in Ireland. ”

“You know the Berkeley Six will be a beacon for all who follow them for the succeeding summers,” he said. “They will loom large in all our lives.”

The mass at St Philip’s Church in the Noe Valley neighbourhood was attended by family members of three of the seven Dublin students injured in the fourth-floor balcony collapse, Hannah Waters, Niall Murray and Conor Flynn, who remain in hospital in the US.

Fr McBride welcomed the members of the Waters and Murray families and Breda Flynn, mother of Conor, to the mass, telling them: “You have our prayers and our support as you journey with your children to full recovery.”

The mass was attended by Irish Consul in San Francisco Philip Grant, Vice Consul Kevin Byrne and members of the pastoral centre, including its executive director Celine Kennelly who sang at the service.

Mr Grant delivered one of the readings Second Letter of St Paul to the Corinthians: “We know that if our earthly dwelling, a tent, should be destroyed, we have a building from God, a dwelling not made with hands, eternal in heaven.”

Among the gifts brought to the altar in the offertory procession were a Dublin flag and an Irish flag representing the home place of the students and a passport — “a document of freedom to travel, to explore outside of Ireland,” said the priest.

Fr McBride spoke warmly of the “energy” that the hundreds of Irish students bring to the Irish community in the San Francisco Bay Area every summer on their J-1 visas.

“All of you will see the county jerseys, the young people walking around, Irish rugby shirts — they come and they bring a great energy and a great enthusiasm to our community. They come to experience summer in San Francisco,” he said.

The Donegal priest, who has been in the Bay Area for 20 years, said that every year his colleague at the pastoral centre Natasha McParland chairs an “orientation” meeting for J-1 students after they arrive, giving them a booklet of information, what she calls the “J-1 Bible.”

Six of the seven injured Dublin students remain in the Bay Area. Five are being treated in four hospitals.

One of the injured Sean Fahey has already returned to Dublin. Two more are expected to be well enough to return to Ireland within the coming week.

Fr McBride asked the congregation to pray for the families of Ms Waters, Mr Flynn and Mr Murray as well as those of the other injured still in the US — Aoife Beary, Clodagh Cogley and Jack Halpin — and for the doctors and nurses still treating them.

“We know these injuries that they received are also life changing. Now is not the time to look back. We don’t recreate the past, what has happened,” he said.

“While we don’t forget the past for those who have died this month’s mind is a time to stop and to look forward.”

A month’s mind commemorative vigil will be held on Sunday evening in the same public park in Berkeley where hundreds of J-1 students attended a vigil the night after the tragedy.